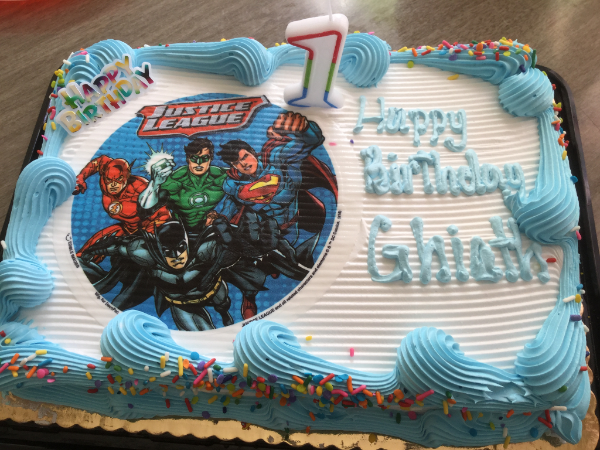 “I  went to the birthday party because I thought Shomrei should be represented,” said Beryl Hiller, who is a member of our Refugee Assistance Group.

The party on July 15 was for Ghiahi, the one- year- old son of a Syrian family in Elizabeth, one of five helped by our synagogue under the auspices of that  group. 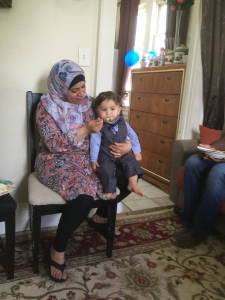 Beryl knew the boy’s mother, Bara’a, because she was one of the women who cooked the delicious dinner for the synagogue on Sukkot as a fund-raising event for these families. That’s when this Shomrei member learned how to make grape-leaves filled with rice and tomatoes that were cut in a unique pattern of little squares.

“There was a lot of sign language going on in the Shomrei kitchen with the Syria Supper Club women  and again last Sunday because I don’t speak Arabic, but we communicated,” Beryl explained.

The hostess prepared a table full of tasty food :homemade hummus, grape leaves, pastry shells filled with potatoes, tabouli, a pomegranate-rice salad,  and many other delicacies. Afterwards, the table was cleared for a variety of rich desserts that are traditional in this culture, including a pudding made with shredded wheat and pistachios.

And of course there was an American birthday cake, with thick creamy frosting and Happy Birthday written in blue.

Beryl brought the birthday boy a bright green tunnel big enough for a child to crawl through. She also gave the family a gift of  peanut butter and dark chocolate candies.

The parents did not immediately open all  the presents, but Beryl encouraged them to show the boy this special  one. 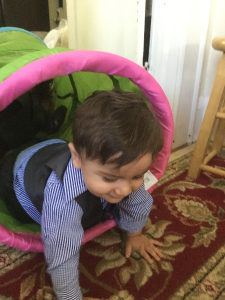 “At first Ghiahi was a little wary, but when his older brother Kihyad, age 3, and sister Christine, age 4, ran right through it, he became intrigued,“ she recounted. “I got down on the floor with him to play and he laughed and screamed with delight,” she recalled. “ It’s fun to watch a child explore the world for the first time.”

Note to reader:  Beryl did not crawl into the tunnel!

One thought on “Sharing a Happy Birthday Party”