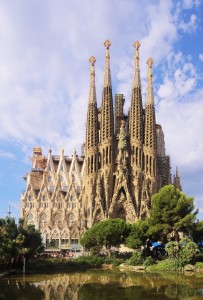 There’s a Jewish proverb that says “No matter what happens, travel gives you a story to tell.” You never know what surprises you’ll find when you travel and where your feet will lead you.

My daughters and I spent a few days in Barcelona, Spain at the beginning of April. We planned to see the usual sites: a walk along La Rambla, tour Gaudi’s famed Sagrada Familia… and Park Guehl, the Picasso Museum, a stroll along the Mediterranean.

But it’s the unexpected that sometimes leaves the greatest impression.

Whenever I visit a new city, I try to attend Kabbalat services, dragging along whoever is with me.

Several weeks before our visit, I researched the various synagogues in Barcelona. There is one Masorti/Conservative synagogue in the city. We emailed as requested and filled out an online form.

So Friday afternoon, we hailed cab, identification in hand and took off for ATID, located in an ordinary neighborhood on two floors of an office building.

As we found out, if we didn’t know it was there, we might not have found it even after the cab dropped us in front of the unassuming building. Nothing stood out to differentiate this building from any other in the neighborhood – at least not until we spied a mezuzah discretely attached to a commercial looking door. 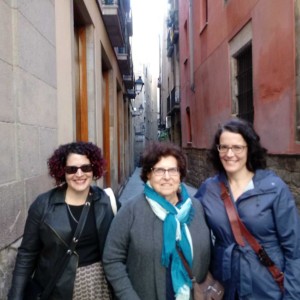 That must be it, we decided and approached. While we are much more security conscious in the US than ever before, the Europeans have it down to a science as we found out as we approached the door and were confronted by a burly man who proceeded to ask a series of questions: where are you from; have you ever been to Barcelona before; have you been to a synagogue here; why are you here; do you attend synagogue regularly; what’s the name of the rabbi at the synagogue you attend. 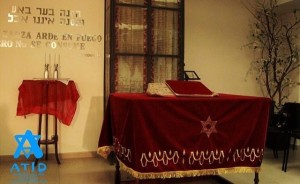 I guess we passed the test as we were let into the building. It looked strangely familiar despite the different language. There was a case with ritual items for sale. There were several bookcases with siddurim. There was literature on community events. And there were people milling around waiting for the 7:30 service to begin even though it was after starting time.

So far, so good. But we were in for a treat. After we took our seats, scores of young adults in their 20s and early 30s walked in. Wow! This congregation of 250 people must be quite a place to attract so many young Jews. 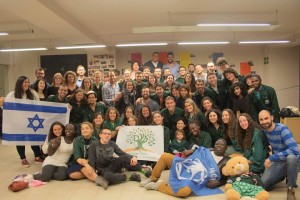 But like us, they were visitors, delegates from Masorti groups around the worlds whose leaders were meetings for a leadership conference.

And that’s when the magic began. Young leaders from Argentina, Australia, Brazil, Chile, France, Israel, Kenya, Spain, Sweden, Uganda, United Kingdom, Ukraine and the United States led the service which was conducted mostly in English, the language most common to the participants and the congregation.

The tunes were mostly familiar Ashkenazic. Most Conservative Jews would have felt comfortable; participation and ruach were high. But we knew that we were not in the U.S. when one of the prayers was sung using a Hungarian melody and then when several were sung to African tunes and a rousing Adon Olam was led by the Spanish contingent. A young Ugandan woman led the service in fluent Hebrew.

To make this experience even more unique was seeing Rabbi Stephen Berkowitz, an American expat from Westchester County, who had been serving as an interim rabbi in Strasbourg a few years ago when I visited. He now resides in Barcelona and is the rabbi of ATID.

Following the service we shared wine and hallah; the young people went off to a dinner on the lower level of the building and the rest of us went of to wherever we had dinner plans.

The spirit lasted for us through the rest of the evening as we walked along the sea, shared a pitcher of sangria and remarked about the closeness of the Jewish world.

Where else but in the Jewish world could we have attended a Conservative/ Masorti synagogue, led by an American expat rabbi, hosting an international group of youth leaders, davening with tunes from several different countries and speaking in Spanish and English? And everyone was smiling! 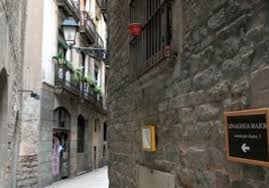 Was it an irony that the next day we toured the miraculous Sagrada Familial designed by Antoni Gaudi? The contrast between the physical spaces was dramatic, but the spirit infusing both spaces was palpable.

Our Jewish experience concluded on Sunday with a tour of Jewish Barcelona. In a way that is a misnomer, for most of Jewish Barcelona is no more, wiped out, not in 1492 but in 1391 by a pogrom which destroyed much of the community which was either killed, forced to flee or convert. 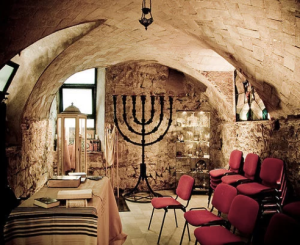 One can see traces of old Jewish Barcelona in La Call, the Jewish quarter of narrow streets. While there is almost nothing left of the community, a small museum is built over the purported site of the synagogue. There are a few streets named after prominent Jews.

And on buildings here and there, if one looks carefully, pieces of engraved stone can be seen. These are tombstones that were removed from the Jewish cemetery and used for building. 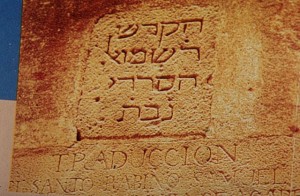 What a poignant reminder of a once flourishing community that made up as much as 15% of Barcelona’s population. The cemetery is a virtual wilderness on Montjuic, a park named for the Jewish cemetery. Once a defensive site, today the park, set on a steep hill overlooking the harbor, is home to the Miro Museum as well as other recreational facilities.

Vibrant Jewish life did not return to Barcelona until after the Franco era. However, the revitalized community has grown and flourished and now has several synagogues, a few kosher restaurants, and new members, from around the world, identifying with the community.

Barcelona is a friendly city, easy to find one’s way around. The pace is not frenetic. Dinner is late (and the food is delicious) There’s something for everyone in this city where modern buildings meet the sea and the old meets the new.

Brooks – The Woman Who defied Kings: the life and times of Dona Gracia Nasi – a Jewish leader during the Renaissance.
Carvajal – The Forgetting River: a modern tale of survival, identity and the Inquisition.
Corona – The Mapmaker’s Daughter: a novel. (FIC)
Gitlitz – A Drizzle of Honey: the lives and recipes of Spain’s secret Jews.
Gordon – The Last Jew. (FIC)
Jules - Never Say a Mean Word Again: a tale from Medieval Spain. (JFIC)
Lewis - The Inquisito’s Diary. (FIC)
Morris – Gateway to the Moon: a novel (FIC)
Ragen – The Ghost of Hannah Mendes: a novel (FIC)
Sachar – Farewell Espana: the world of the Sephardim remembered.
Sasso – Abuelita’s Secret Matzahs (JFIC)
Shulevitz – The Travels of Benjamin of Tudela: through three continents in the twelfth century (JBIO)
Sternberg – The Sephardic Kitchen: the healthy food and rich culture of the Mediterranean Jews.