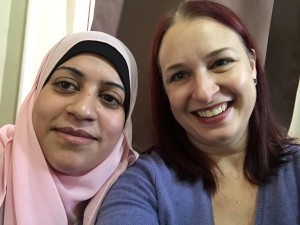 The biggest reason my family joined Shomrei back in 2015 is because of the community here. So as the crisis in Syria grew,  my husband and I kept asking each other: Should we do something? Adopt a Syrian orphan? Donate some clothes? It seemed obvious that I should email the rabbi. Was Shomrei “doing” anything? 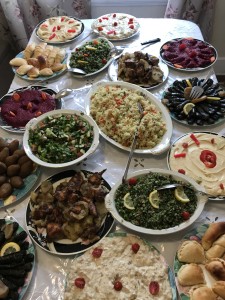 The rabbi connected me to a woman named Sally who was helping set up an apartment for a refugee family in Elizabeth. Sally invited me to a meeting for her group One World, One Love. There, I learned about the Syrian Supper Club. At my first SSC dinner I met the cooks, Hamida and Bara’a. I got their phone numbers and gave them mine. “I can help!” I said.

I met with Andy Silver and Nick Levitin and we decided that we wanted to be hands-on for the long-haul. We wanted to be the American friends that new refugees needed. And hey, guess what? I happen to have befriended these two recent refugees from Syria… 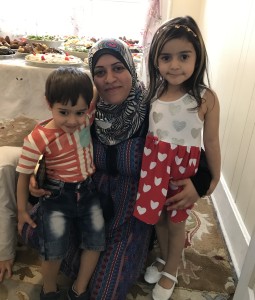 Andy’s wife Merrill had the wonderful idea to take Bara’a to get her library card. We set up a donations box in the Shomrei lobby. We schlepped donated items to Bara’a and Hamida. I invited Bara’a’s family to my house for Thanksgiving, where, through an interpreter, she was finally able to tell me her story of fleeing Syria and living in a refugee camp for four years, where her two older children were born. Through the interpreter my parents told her the stories of their grandparents who fled a town in the Pale of Settlement that no longer exists because of a pogrom. Our refugee group contacted an immigration lawyer who helped Bara’a and her family get their green cards — entirely pro bono. Thanks to a gift from the rabbi, her 4 year old almost knows her ABC’s — in English! 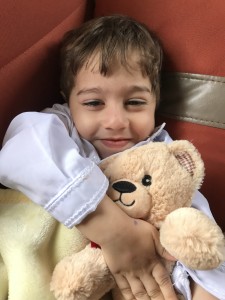 Bara’a and I are slowly, with the help of Google Translate, becoming real friends. When I learned that her 3-year old was to have surgery, even “routine,” I ran out to buy balloons because that’s what I’d do for any friend. As a parent I could not have imagined anything scarier than my child needing surgery, until the lawyer told me that Bara’a was unable to communicate directly with her child’s doctors, and was therefore scared out of her wits. Andy and Merrill assured Bara’a that the surgery would be fine. She visibly relaxed. (The little one is doing great. Like most 3-year olds, he’d rather play than get the post-op rest he needs!)

Andy, Nick, and other members of our Refugee Assistance Group have “adopted” and befriended several other families and individuals since those days in the spring of 2016. Perhaps some of you have eaten their cooking, or seen them at Shomrei events.

We Jews know what it’s like to be strangers in a strange land. But with the generous donations from Shomrei’s community, the next wave of the world’s refugees now have furniture for their new homes, and toys and clothes for their children. We’re helping them figure out how to enroll their kids in school. We’re helping them find work. We’re making introductions and connections so that they can make better lives for themselves.

Our help is definitely not “front-loaded.” The greater Shomrei community is influencing a generation of new Americans. We’re turning strangers into friends. And maybe some day these kids will grow up to pay it forward, yet again, to the next wave of new Americans.

Meredith is a work-at-home-mom data processor and speculative fiction writer. Her interests include film studies, baking, historical research, wine, and yoga. She lives in Glen Ridge with her husband Carlos and their two sons, Gabriel and Nathaniel.

5 thoughts on “Turning Strangers into Friends”