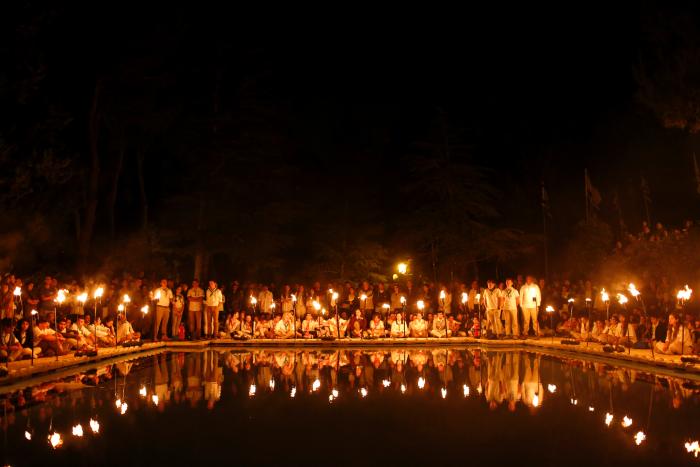 Israeli youth Scouts are reflected in a pool as they light torches, during a memorial ceremony at the Mount Herzl military cemetery, on the eve of Memorial Day in Jerusalem, Israel, 10 May 2016. (Credit: EPA)

The Month of Iyyar

But as much as it is young, it is unique. In this young holiday is hidden an ancient mystery.

The exile in Egypt lasted 400 years. In leaving there, the people went from slavery to freedom.

The Assyrian exile was one to which a portion of the people left, never to return.

The Babylonian exile – to which the Jews went and from which they returned after 70 years to establish the Second Temple.

The Roman exile – to which the Jews went after the destruction of the Second Temple, almost 2000 years ago, and from which they returned to establish the State of Israel.

This people established the State of Israel only 68 years ago, but they actually dreamt of it for hundreds and thousands of years. On Independence Day we should remember that this young holiday is the fulfillment of an ancient dream, thousands of years old.

Has the dream really been fulfilled? Is the work accomplished?

In our time Independence Day lacks meaningful traditional content. Mostly we spend the day in prayer, in watching the ceremony of lighting fires on Mount Herzl, in watching the Bible Quiz, the awarding of the Israel Prize and in viewing nostalgic films on TV. One of our goals must be the construction of a “Seder” for Independence Day that will be meaningful and authentic. We must also remember that not all the Jews have returned from the Diaspora. Many of our compatriots dwell in foreign lands. There are missing and captured IDF soldiers.

In this month of Iyyar let us raise up a prayer:

“Sound a great shofar for our freedom, and lift a flag to gather our dispersed, bringing us together from the four corners of the earth.” [Weekday Amidah]