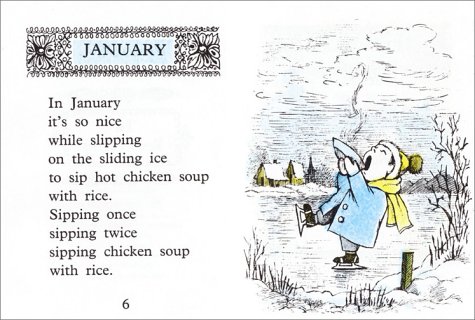 January should be called Soup Month- in fact it is. Along with baths, birds and hugs, soup is celebrated in January although it’s perfect any month of the year. Just ask Maurice Sendak whose slim book Chicken Soup with Rice celebrates that staple in every month of the year.

Soup can be silkily elegant or chunkily hearty. It can whet your appetite for what comes next or make you feel satisfyingly full.

In fact, soup can be whatever you want it to be and can be made with almost anything. In addition, cooking soups from different Jewish communities is a great way to learn about different Jewish cultures. It can also be the inspiration for stories for the young and reminiscences for the older folks.

For example, I recently did a series of story times just with books about soup. (You’d be surprised by how many there are.) Many children’s books have recipes in the back which provide  a chance to work together as a family making memories and exploring another culture-or just having a laugh over a silly story that features soup.

Try some of these  books and stories and then sample the soup recipes from the books below or in the recipe column.

Franklin, Soups of Hakafri Restaurant. A cross cultural cookbook by an American transplant to Israel

Glaser, Stone Soup with Matzoh Balls: a Passover  tale of Chelm. The classic story of making soup from almost nothing with a holiday touch. (Picture book)

Hershenhorn, Chicken Soup by Heart. When Rudie’s baby sitter gets sick, he makes her chicken soup flavored with stories of experiences they shared. A story of sustenance and kindness. (Picture book)

Karkowsky, Grandma’s Soup. When her grandmother’s chicken soup begins to taste strange, a little girl has to face the fact of her grandmother’s fading memory. A touching and tender story of aging and family love. (Picture book)

Koenig, The Jewish Cookbook . This wonderful, encyclopedic book has an entire chapter on soups and its close cousin stew. 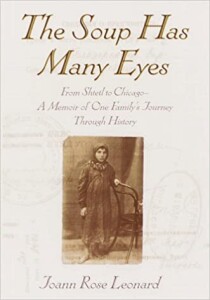 Leonard, The soup has many eyes: from shtetl to Chicago: a memoir of one family’s journey through history.  Using her grandfather’s soup pot and remembered family recipes, the author tells her family’s story.

Price, Dena G. The everything kosher slow cooker cookbook. Slow cookers were made for cooking soup. Enjoy a chapter full of a variety of soups.

Schubert, The Princess of Borscht. Ruthie tries to make her grandmother’s secret borscht to make her feel better. (Picture book)

Solomonov, Zahav: a world of Israeli cooking. This darling of the Jewish cooking world gives his own twist to soup.

Sussman, Sababa: fresh, sunny flavors from my Israeli kitchen.  Transplanted from the U.S., the author’s fresh approach to food is refreshing.

One thought on “It’s Soup Month”