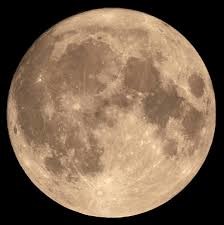 The Talmud tells us that the nations of the world count by the sun, but Israel counts by the moon. In fact, while the Israelites were still in Egypt, God commanded that the moon be sanctified.

The Jewish calendar is lunar, but as with many things, we Jews have improved upon the basic lunar calendar so that –as commanded- the holidays fall in the correct seasons. 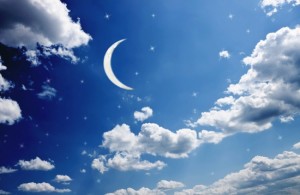 We devised a way that the news of the new moon that signals the beginning of a month would be consistent throughout the land. Prior to 358 C.E., the Sanhedrin in Jerusalem would proclaim the beginning of the month. A tall torch would be lit on the Mount of Olives. Watchers on nearby hills would see the light of the torch and light their torches. A chain of lit torches would shine from the hills and all would know that a new month had begun. What a sight that must have been!

Eventually , as people spread to other places, it became too difficult to get the message out by torch in a timely fashion and messengers were sent throughout the Jewish world.

The moon has been important in the life of women. Rosh Hodesh became a special day for Jewish women. The day has been reclaimed by modern women as a day to study and celebrate. 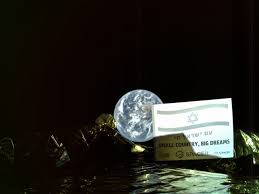 Fascination with the moon reached its peak with space exploration. Just months ago, Israel made an attempt to land on object on the moon. With typical Israeli hutzpah, the initial planning was done by 3 young penniless engineers. While the outcome of this project was not the desired one, Beresheet, the Israeli lunar lander, was the first privately funded object to orbit the moon and the fourth to actually make it to the surface although it crash landed. Israel was only the seventh country in the world to put on object in orbit around the moon.

Pretty good for such a small country.

The moon has also been the subject of many Jewish stories including how the wise Chelmites captured the moon. Perhaps it’s the moon’s mystery, its shadows and shapes that can be seen from earth, that fire the imagination.

On this anniversary of the first human to set foot on the moon, consider the moon, the science and the fiction.

Maybe it’s those cows who jumped over the moon that are responsible for the green cheese.

Books featuring the moon:
Falk, The Book of Blessings: new Jewish prayers for daily life.
Hirsh, The Rabbi and the Twenty-nine Witches. A wise rabbi figures out how to get rid of the witches that plague the village when the moon is full.
Hyde, Shanghai Sukkah. Marcus and his family, refugees in Shanghai, share Sukkot and the Chinese Moon Festival.
Ofanansky, New Moon, New Month. A basic explanation of the moon’s cycle and importance in Jewish practice.
Schwartz, A Coat for the Moon and Other Jewish Tales. A collection of tales from around the world.
Serwer, Let’s Steal the Moon: Jewish Tales, ancient and recent.
Zalben, A Moon for Moe & Me. Two boys, one Jewish and one Muslim, share a picnic at Rosh Hashanah/ Ramadan time.