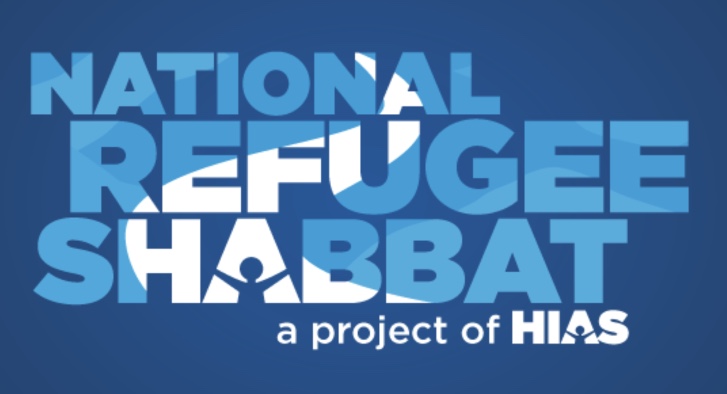 Our friends at Bnai Keshet (Reconstructionist Synagogue in Montclair)  will host a weekend of activities, for National Refugee Shabbat, part of a nationwide effort by the Hebrew Immigrant Aid Society, (HIAS), to educate and train participants on issues and ways to help detained immigrants and asylum seekers. All events will be held at Bnai Keshet, 99 So. Fullerton Ave. in Montclair.

6:30PM: Dinner at Bnai Keshet prepared by recent refugees to New Jersey from Syria, as part of United Tastes of America. 7:15PM: A panel discussion of experts and recent and past refugees discuss the current crisis and tell their stories. Speakers include Abdul Alargha, Ivan Grosz, Bnyad Sharef and Lori Nessel. Bios below. Dinner ($20 a person) or join the discussion at 7:15pm. For additional information, contact 973-746-4889, email hidden; JavaScript is required, or www.bnaikeshet.org, call 873-746-4889 or contact email hidden; JavaScript is required

Sunday, October 21, 2:00–3:30PM: First Friends Presentation on Immigrants and Refugees in Detention and Volunteer Opportunities for Support and Advocacy

A 90-minute interactive presentation at Bnai Keshet by First Friends, a non-profit organization that serves immigrants and asylum seekers held in detention in local detention centers through volunteer visitations, resettlement assistance, and advocacy.

Abdul Alargha grew up in Syria and was a successful businessman in Damascus. After starting a nonprofit to help women and children who were widowed and orphaned during the war in Syria, he became a target of the Assad regime and had to flee the country immediately with very few possessions. His wife Rana fled separately with their three children. They were separated and homeless at times for two years while moving through the Middle East as refugees, trying to make their way to the US. Eventually, Abdul was granted asylum in the US. He reunited with his family and settled in Montclair.

Ivan Grosz was born in Romania in 1935 and lived there until he emigrated with his mother and sister to Vienna, Austria in 1961. In 1962, he was granted political refugee status and he moved to the United States. He later attended the Harvard Business School, became an investment banker, and settled in the suburbs of NYC with his wife and two children. His daughter is now a member of Bnai Keshet with her family.

Bnyad Sharef is an activist who advocates for refugee and immigrant rights and for a more harmonious, peaceful, and prosperous world free of discrimination and injustice. Granted Special Immigrant visas because of his father’s work as a translator for the US government in Iraq, as a consequence of the 2016 “travel ban,” Bynad’s family was sent back to Iraq when attempting to immigrate. After much advocacy, they were allowed to enter the US, arriving in Tennessee in 2017. Bnyad currently works for the Tennessee Immigrant and Refugee Rights Coalition.

Lori Nessel is a Professor of Law and the Director of Seton Hall University School of Law’s Center for Social Justice. Her teaching and scholarship focuses largely in the areas of immigration and refugee law and policy, international human rights, rule of law, and access to justice. She runs the Immigrants’ Rights/International Human Rights Clinic and has written about the following: the intersection of immigration and labor laws as it affects undocumented workers, gender, and immigration issues; the Torture Convention; family reunification; post-conflict community justice mechanisms and gender-based torture in Rwanda; the plight of migrant farmworkers; and private medical deportations by US hospitals.

Judith is a freelance writer and editor working with digital and print material from finance to food, politics to poetry, and tech to travel. A chocolatier as well, Judith owns and operates "Bark & Truffle" a business in Montclair and provides chocolate truffles for special events and parties. Judith joined Shomrei in 2017.