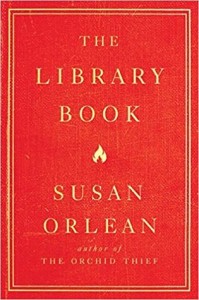 Our next selection is “The Library Book” by Susan Orlean. It’s a non-fiction account of the huge fire that destroyed the main library in Los Angeles in 1986. Nearly 400,000 books were lost in the 7-hour blaze. How did it start? It’s a mystery.

Because we are “the People of the Book” Merrill thinks it will be an interesting change of pace for us. There are many copies available in the inter-library system.

For the Fall sessions, suggestions are:

“The Flight Portfolio” a fictional account of the historic rescue of prominent artists from Nazi-occupied Europe.

“The Cloister”..The story of Heloise and Aberlard is entwined with a cleric searching for meaning and a Holocaust survivor whose father specialized in this period of history.

“The Only Woman in the Room” the fictional story of film star Hedy Lamaar. She fled from the Nazis to the US, hiding her Jewish background, secrets she learned from her husband’s role as a leader in industry, and her considerable expertise as a scientist and communications pioneer.

“The Last Watchman of Old Cairo” The central character is the son of a Muslim father and a Jewish woman . For centuries, the men of his family guarded the Ezra Synagogue in Old Cairo; he travels to Egypt to search out this connection.

Hope to see many of you in July to discuss “The Library Book.”

The book is also available at the public library or from other booksellers.

One thought on “Book Club: The Library Book by Susan Orlean”