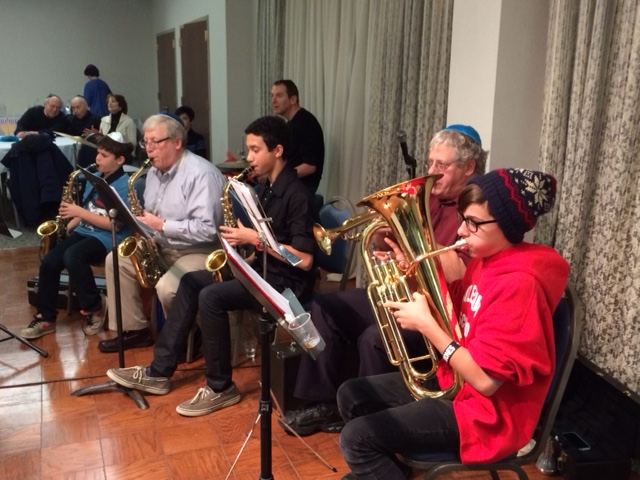 It was only the second night of Chanuka but the Simcha Band lit up the Shomrei Chanuka party as if it were the 8th night. The audience enjoyed listening and dancing to the music as much as the musicians enjoyed playing and singing.

A heartfelt thanks to the following people:

Conductor Mark Weinstein brings out the best in individual musicians and then gets the best sound from the band as a whole.

Drummer Sam Lasiter is one of the original members of the band and comes to all rehearsals. It is great knowing we can always count on Sam.

Drummer Howie Erichson agreed to join the band with a smile in his voice and a great beat in his fingers.

Alto saxophone player Elliot Lasiter. As soon as he was 10 years old, Elliot signed up for the Simcha band and came to every rehearsal. He may be our youngest member but he holds his own easily.

Alto saxophone player Alex Bondorofsky made his debut in the Chanuka band and came to both rehearsals. We hope he will be a regular in the Simcha band. He is multi-talented and we wonder which instrument he will play next.

Alto saxophone player Sol Bernstein who guaranteed there would be no traffic on Route 3 and that the DeCamp bus would get him to the party on time. He was right and we enjoyed listening to his playing. 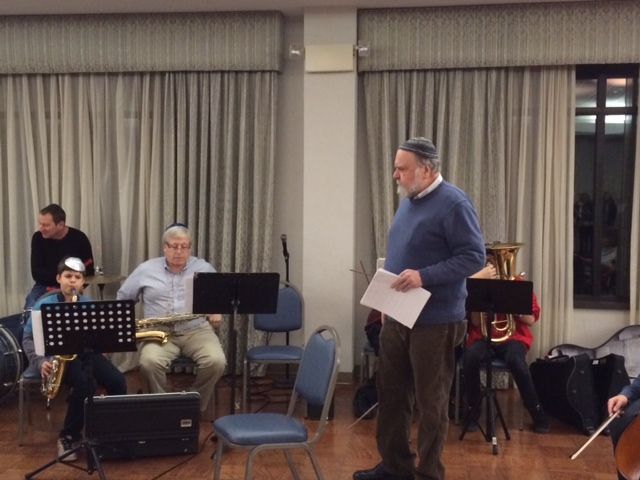 Trumpet player Jay Bernstein. Sol was having so much fun playing in the Simcha band that he invited his brother to join us. He was a great addition to the trumpet section and we hope he will be a regular.

Trumpet player Isaac Schwartz originally had another commitment that night but decided playing in the Simcha Band was too important (and fun) to miss. Isaac – we were so glad to welcome you.

Baritone horn player Louis Kravitz adds his special sound to the band, comes to rehearsals and repaired his valves just in time for the concert!

Singer Andy Silikovitz encourages everyone to sing along and have a good time.

Violinist Jerilyn Margolis made her debut and added so much to our string section. We hope Jerilyn will be a regular now.

Cellist Renee Chalom surprised us. After finishing his semester at Princeton University, he raced over to Shomrei to join the band. We missed him last year and were so happy to welcome him back for Chanuka.

Bass player Dr. Ken Bannerman always says YES to the band, no matter how difficult it is to juggle his busy schedule. We always count on his professionalism in the band.

Piano player Merrill Silver. After being the band manager for all these years, I decided to join the band as a musician. What fun! I learned so much from

Mark about keeping the beat and giving up the melody.

We always welcome new musicians. If you are 10 years old or older and can read music, the Simcha band is for you. If you haven’t touched your instrument since your junior high school days, it is time to get reacquainted with it. If you practice regularly and love to play, the band is for you. Please join us for our Purim and Shabbat Concerts.