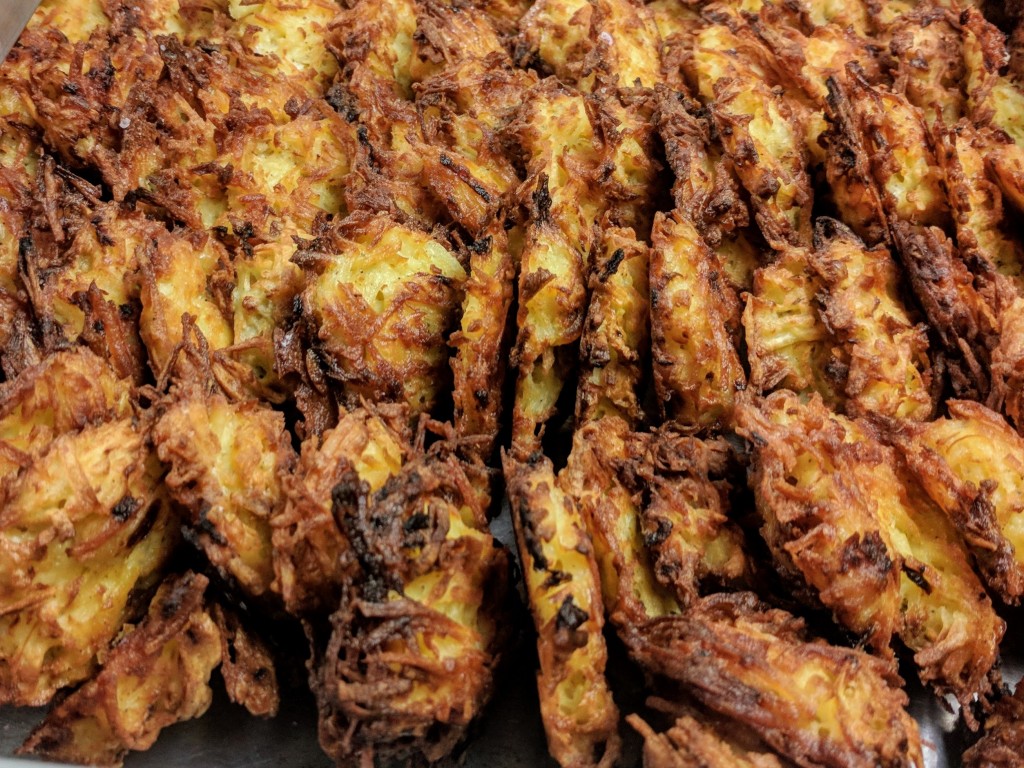 The Latke Crew Baked 630 latkes for last night’s Hanukkah party!  Thanks and “yasher koach” to the entire hardworking Latke Crew: Leon Berman, Charlie, Kate and Alan Breslin, Adam Dembrow, Yechiel Felder, Fern Heinig, & Aaron Task. (see a gallery of photos below).  A number of people asked me for my recipe, so here it is:

I developed this recipe for use at Shomrei for the annual Hanukkah party.  The event has grown quite a bit in the last few years and we now make over 600 Latkes for the party!  It’s a real killer to pan fry that number of latkes so after a lot of trial and error I came up with this baked version. The recipe also uses frozen shredded potatoes. These have just the right dryness and are already slightly par-cooked.

I didn’t set out to make them gluten free.  It just so happened in my experiments that using potato starch as a binder instead of flour gave them a lighter more potato like feel. So voilá! Gluten free! A word about the ovens

This recipe was developed for industrial convection ovens, ovens with fans inside to circulate the hot air. It should work easily in a home convection oven. I haven’t tried this recipe in a conventional oven.  (one without circulation fans). In such an oven they may not get as golden and crispy a shell. And the bake time may be longer.

The result should be golden brown latkes which are not too oily, crunchy on the outside and soft on the inside.

Peel onions and grate with a large cheese grater or food processor. Place in colander and let the liquid drain away. It’s important that the onions fully drain otherwise the mix will have too much liquid.

In large bowl, beat the eggs, Then combine all ingredients (except oil) until well mixed.

Prepare baking sheet(s) which have a side or lip with oil.  Pour enough oil to cover the pan to a depth of approx ⅛ of an inch.

Use a standard  ice cream scooper (or something similar) to portion latkes on the pan. For consistent done-ness all the Latkes should be as close to the same size as possible.

Flatten the scooped latkes if necessary. (should be flat)

Bake for 12-16 minutes.  The time will depend on your oven.  You’ll know it’s time when the outer fringes of the latkes at the bottom (in the oil) are golden brown.

Remove the pan, flip the latkes, spin the pan 180 degrees and return to the oven for 3-5 minutes.

When done remove  the latkes to draining rack and immediately salt to taste.

If you are doing multiple batches, you can reuse the oil, but make sure to strain out an left-behind crispy bits in the oil.  Otherwise these will turn black and give the oil a bitter taste.

The Latke Crew at Work

John has been at Shomrei Emunah since 2006. He's the designer and co-editor of ShomreiWeek (weekly newsletter) and Kol Emunah Blog. He's a graphic/web designer and a theater lighting designer. When he's not designing graphics and posters for Shomrei he's sometimes in some far-flung corner of the country working on musicals and plays. He lives in Montclair with his wife Adrienne and children, Sam and Elliot.