Jennifer Moss: Tell me something about how you came to write Purim Spiels. Do you have a special love for parodies?

Craig Eichner: Absolutely. I grew up on Mad Magazine, where they were always parodying movies. And one of my biggest musical influences was Allan Sherman. We had all his records at home.

JM: Allan Sherman—I love him! (Craig and I both broke off the interview at this point to sing a rendition of Shake Hands with Your Uncle Max, Sherman’s parody of Dear Old Donegal.) 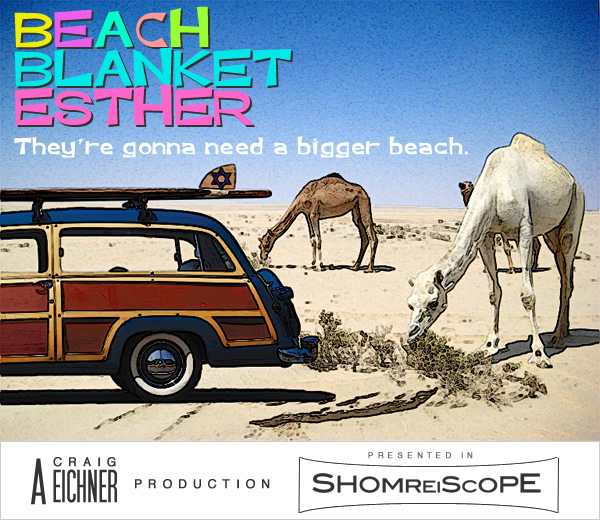 CE: Anyway, when I was a teenager in the United Synagogue Youth, a bunch of us used to follow Sherman’s lead and write song parodies—that’s how I got started. And a Purim Spiel is a unique opportunity. There really is something farcical about the Book of Esther, and I mean in a good way. The rabbis have always known this. A spiel is a brilliant way for a synagogue community to come together and celebrate that aspect of our canon.

JM: And this year’s Purim Spiel will be a parody of the Beach Boys?

CE: Yes. This is a departure for me. It’s the first spiel I’ve done that’s not based on a Broadway show.

JM: Was writing to the melodies of the Beach Boys a different experience than writing to show tunes?

CE: Oh, yes. Shows tunes lend themselves better to a narrative—I find them easier to parody. In pop music, the phrases are shorter. They’re more challenging, because you have to say what you want to say in fewer words.

JM: So what made you take a chance with the Beach Boys?

CE: Well, on one hand I wanted to break out of the mold of show tunes. I wanted to try something different. And on the other hand, I was running out of shows!

JM: What sparked the idea to use the Beach Boys?

CE: It probably wasn’t a “what”—it might have been a “who.” A lot of the shows we used for the spiels were suggested by other people. My daughter Melanie inspired me to do a spiel based on The Rocky Horror Picture Show. Shira Atkins suggested Guys and Dolls. So someone else may have given me the idea. But I thought it would be a cool thing to do. I knew of spiels based on the Beatles, and of at least one based on Bill Joel songs. I haven’t seen one based on the Beach Boys yet, though it may be out there.

CE: Definitely. I saw the Beach Boys in concert twice. The first time was in 1973, when they played in Princeton. I got in free as an usher; once everyone was seated, I got to enjoy the concert. In the late 80’s, Mimi and I saw them at the Meadowlands. There’s nothing like hearing the songs you grew up with performed by the original artists.

JM: But despite the idea and despite liking the Beach Boys, it was a while before you wrote this spiel, right?

CE: This spiel was five years in the making. One line came into my brain right away—the opening of the first song—but then nothing. So I set it aside. But this year I decided it’d been too long time since I wrote a new one. I wanted to prove that I still had it in me. So instead of waiting for my muse to speak to me, I sat down with it and I focused on it through the summer and the fall. So this one has been great for me. It felt really good.

JM: How many spiels have you done altogether?

CE: Eight musicals (including this new one) and one non-musical. In my senior year in college, I wrote a non-musical spiel spoofing the Sherlock Holmes legend.

JM: Do you have a favorite?

CE: Each of them has something kind of special. My Fair Hamantaschen—to My Fair Lady, of course—was my first. I wanted to do Grease, but it wasn’t working. Then someone mentioned My Fair Lady and something just clicked. Within two weeks I had written all the songs. Hardly anyone at Shomrei knew me then; it was 1997. When the rabbi at the time made the announcement that Craig Eichner would be writing and running the spiel, I could hear people thinking, “Who?”

Inexplicably, two years later, the Grease parody popped into my head. And that was the first one to include Zeresh (I later rewrote My Fair Hamantaschen to give her a song). Green Grows the Graggers (Oklahoma!) was the first one to feature a running gag with a payoff punch line at the end. The parodies to Chicago and Guys and Dolls, meanwhile, were challenging because the original songs were so complex.

JM: So after that first spiel for Shomrei, you came back and did it the following year.

CE: I hadn’t intended to do another one, but a few months later, during the oneg after a Friday evening service, several people came up to me and asked if I would put together another spiel. I wanted to show that I wasn’t just a one-trick pony. Thus was born West Side Shushan, based on West Side Story. And once you do something twice at Shomrei, it’s a tradition.

JM: What’s it like to put the show together? Any heart attack moments?

CE: I can remember with my first spiel, after our first rehearsal, I had a splitting headache. I kept thinking this will never work. But it did!

I am blessed to have a group of people who are willing to put in the time and the effort to be in the cast, to learn the songs, and to put themselves out there—to make themselves ridiculous in the spirit of Purim. A nightmare scenario would be: what if I, or anyone else, wrote a spiel and no one wanted to be a part of it? I’m grateful to all those who have worked, and continue to work, to put on the spiels, and I am always thrilled with the results. It’s a wonderful thing, it really is.