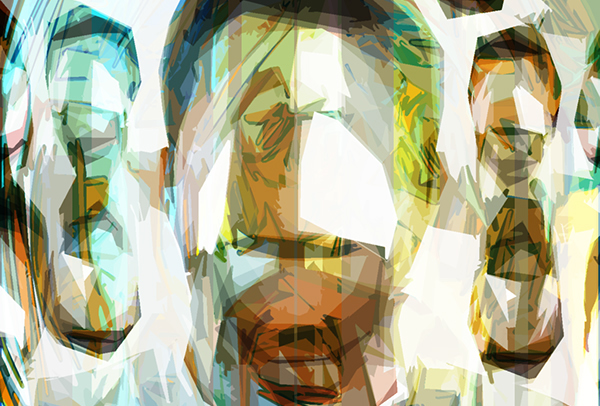 When Moses retells the story of the giving of the Torah at Mount Sinai he introduces the second version of the Ten Commandments with a few dramatic verses: “Face to face did the Eternal speak with you on the mountain, from out of the fire. I was standing between the Eternal and you at that moment to tell you the Word of the Eternal, for you were afraid in the face of the fire and did not ascend up the mountain, saying: ‘I am the Eternal… etc.” (Deut. 5:4-6)

There are conceptual and textual difficulties in these verses. It sounds as if Moses is claiming that God spoke to Israel “face to face.” This is hard to understand, since God has famously said that no human can see God’s Face and live. (See one discussion of this in Sparks for 2010) In addition, the text reads awkwardly, ending with the word, “saying” so as to introduce the Ten Sayings of God, but without a clear antecedent for that word. As many commentators have pointed out, the verse would have been much smoother had it read, “Face to face did the Eternal speak with you on the mountain, from out of the fire, saying.” This would combine verse 4 with the last word of verse 5, leading seamlessly into verse 6.  But Moses, with verse 5, has literally interposed himself in between God and Israel – precisely after saying that God and Israel spoke “face to face,” that is, without any interfering barrier!

Yet, that may be Moses’ very point. We have read already that God treasured the intimate communication that was the unique gift of Moses. (see Num. 12:8) and we will read, at the very close of the Torah, that only Moses had an intimate, “face to face” experience of God. The implication is clear: only Moses was able to have that experience. Israel was not so gifted. Perhaps, then, Moses means to say that it is because of his intermediary role that Israel enjoyed receiving the Torah “face to face.” It was because God spoke to Moses, not Israel, face to face that Israel was able to benefit from such a uniquely intimate revelation.

This was the paradoxical result of Israel’s fear “in the face of the fire.” Had they not been afraid they would have heard God’s revelation directly – directly but not intimately. The very public and mass aspect of the revelation would have somewhat diluted the revelation, for it would have been necessary for God to make it apprehensible to everyone. But, because they were too afraid “of the face of the fire,” let alone the Face of God, they sent Moses to be their go-between. Moses was both a buffer between God and Israel, but also and intensifier and amplifier of God’s Word, for he alone was capable of receiving God “face to face.”

Unknowingly, the people’s fear became a blessing for them, a gift. And therefore God could be pleased with their frightful flight from God’s Face. When they implore Moses to stand between them and God, the Eternal responds, saying: “I have heard the voice of this people as they spoke with you – they have done well in all that they have spoken!” (Deut. 5:25) Instead of feeling rejected, God is happy! Whence did this unintended blessing derive? God explains in the next words: “If only this their heart would be thus for them .. forever.” Choosing Moses to receive the Torah might have appeared to be an act of cowardly flight, but, in a deeper way, this was the mysterious wisdom of the people’s own heart.

Image: “Abstract” by Emrah Ozdemir is licensed under CC BY-NC-ND 4.0