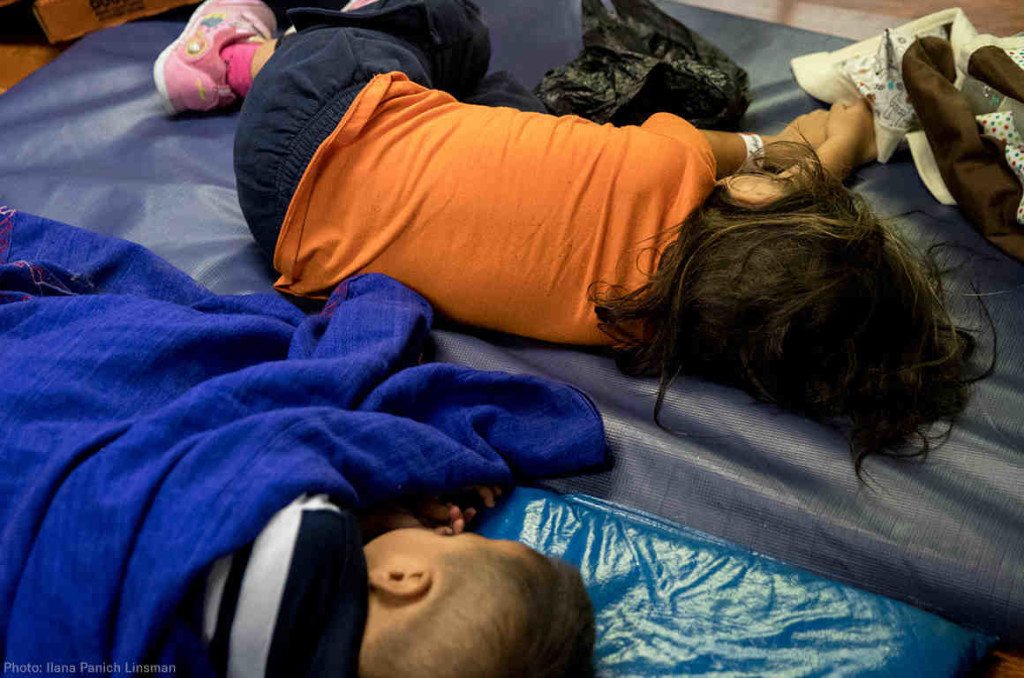 Children at a US detention facility whose parents have been separately deported. Photo by Llana Panich Linsman, courtesy of ACLU.

The Psalmist rejoices: “God’s Torah is perfect; it restores the soul!” (Ps. 19:8) Yet, for moderns, the Torah’s perfection is far from clear. For us the Torah seems to zigzag towards and then away from perfection. It contains many sublime and uplifting laws and demands for pursuing a life of goodness and justice. But it also includes so many laws that make us uncomfortable or that we find incomprehensible or indefensible. A number of problematic laws can be found in our Torah portion. I have discussed how we might think about specific examples of such laws in the past. (See, e.g., last year’s Sparks for this Torah portion.)

But our discomfort is not only a modern phenomenon. The ancients also struggled with some of the Torah’s provisions. In cases where the Torah seemed to set the moral bar much too low for our satisfaction, they suggested an important insight: “the Torah takes human nature into account.” (see Rashi to Deut. 21:11; and for some further discussion of this principle, see Sparks, Ki Tetze, for 2012) What our sages of old were trying to say was that an absolute standard of perfection would have been self-defeating for the Torah. Had the Torah not taken human nature into account and agreed to accommodate our limitations and failings, the Torah would have been rejected by the people as much too unrealistic, and we never would have embarked on the road to repairing the world that the Torah has pushed us along.

So this principle – “the Torah takes human nature into account” – serves to excuse some of the laws in the Torah that we don’t see as perfectly good. Another area where this principle is applied is in explaining why the Torah, despite its rules that severely curtail and humanize the institution, nevertheless seems to allow for the continuation of the abhorrent practice of slavery. The argument goes that, in order for the Torah to be accepted 3000 years ago, it had to start by compromising and making an allowance for this commonly accepted, though evil, way of life.

It is therefore bracing to discover that the Torah’s accommodation to human nature is also the source of one of its most ethically demanding laws, a law that relates precisely to the vexing issue of slavery.

Our Torah portion issues this command: “You shall not return a slave to his master’s custody when he has sought to be saved from his master by coming to you. Let him dwell with you, in your midst, wherever he chooses of your habitations that is good for him; do not oppress him.” (Deut. 23:16-17) How amazing! This is the same Torah that allows for masters and slaves in the first place. The slave is the master’s property. And, in this same Torah portion we are commanded to return lost property to its owner. Yet the Torah forbids returning the lost property of a slave to his or her owner!

By what right has this runaway slave earned his freedom? The slave has not filed an application to be freed. The slave has not completed an immigration form. How can the Torah allow such a breach of norms? The answer can only be that  “the Torah takes human nature into account.” Except here, the “human nature” that the Torah bows to is not the imperfect and selfish tendency in all of us.  This time the Torah is roused to glory, inspired by the human heart’s nobility – the intense yearning for freedom in that slave’s heart. This time the Torah’s perfection is not compromised for our sake, but is fulfilled, thanks to this desperate and indomitable slave who refuses to be a slave.

And there is one other element in this slave’s human nature that moves the Torah no end. The Torah cannot resist the sight of this refugee who places all their hope in the goodness of another human being. The slave has run to you because they refuse to believe that all human beings are like their own domineering master. The slave has not relinquished a hope that people can be goodhearted. The Torah recognizes that Her own hope to find goodness in the human spirit, so often tempered, deferred and compromised, is most vividly found in the heart of that refugee!

This is the challenge facing the people to whom this refugee has run to, seeking safety. It is a challenge thrown down to us thousands of years ago, but it has taken on utmost urgency in our own modern society. When a person runs away from a life of degradation and danger, powered by a dream of freedom and safety, will we return this poor soul to a life of oppression, or will we rise up to the level of God’s Torah , that is perfect – and restores the soul?

image:  Children at a US detention facility whose parents have been separately deported. Photo by Llana Panich Linsman, courtesy of ACLU.