The Jewish Family Service of Clifton sponsored a community commemoration of Kristallnacht on Monday, Nov. 9th, and Bruce and I attended the movie, Once Upon A Family, the history of Jews in Poland. Holocaust survivors spoke in the film about their family’s experiences before, during and after the holocaust in Poland. Their stories were very powerful, expressing horrors and cruelty beyond human understanding. Some of their children and grandchildren were there to speak about their relatives after the film.

I was moved by Zvi Michaeli, a holocaust survivor from Eisheshuk, where my maternal grandparents were married in my great uncle’s home. My great-uncle, Avrom Nocham Frankl was a master builder. Zvi, at age eleven, was an apprentice in my great-uncle’s workshop.

On Rosh Hashanah, 1941, the Germans invaded Eisheshuk and marched all the men to the killing fields. Zvi Michaeli was fourteen, and marched in front of his father. His father, seeing that everyone was being shot in the back of the neck, threw his arms around his son and they both fell into the huge pit of bodies. Zvi recounted that he thought he was dead, and death didn’t seem so bad. Then he felt the weight of his father, which got heavier and heavier. His father’s blood dripped all over him for hours. He stayed there for a day and a half and then climbed out in the middle of the night with great difficulty – through the mass of bodies. He went to Radon and warned the Jews to flee. Then, he fled to the forest, fought with the partisans and the Russian Army until the war was over.

(interview with Zvi Michaeli, from USC Shoah Foundation, the interview is disturbing and not recommended for those younger than 14)

He now lives in Florida and I’ve spoken to him on the phone. I met his daughter at the annual Eisheshuk Reunion in Brooklyn which takes place every year before Rosh Hashanah. I am named after my Great-Uncle, Avram Nocham and Zvi is a personal connection to me. A fire destroyed half of Eisheshuk in 1897 and my great-uncle went into the burning home of the Mayor to save his baby and came out with only a pillow. Avrom lost his first wife (the mayor’s daughter) and his baby in that fire. 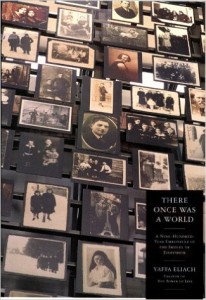 This is mentioned in the book, There Once Was a World by Yaffa Eliach. President Ford read that book and asked Yaffa Eliach to help with the Holocaust Museum in Washington. Yaffa Eliach (b. Yaffa Sonenson, Eišiškės, (Yiddish: אישישוק‎/Eishyshok) 31 May 1937) is a historian, author, and scholar of Judaic Studies and the Holocaust. She is probably best known for creating the “Tower of Life” made up by 1,500 photographs for permanent display at the US Holocaust Museum in Washington, D.C.