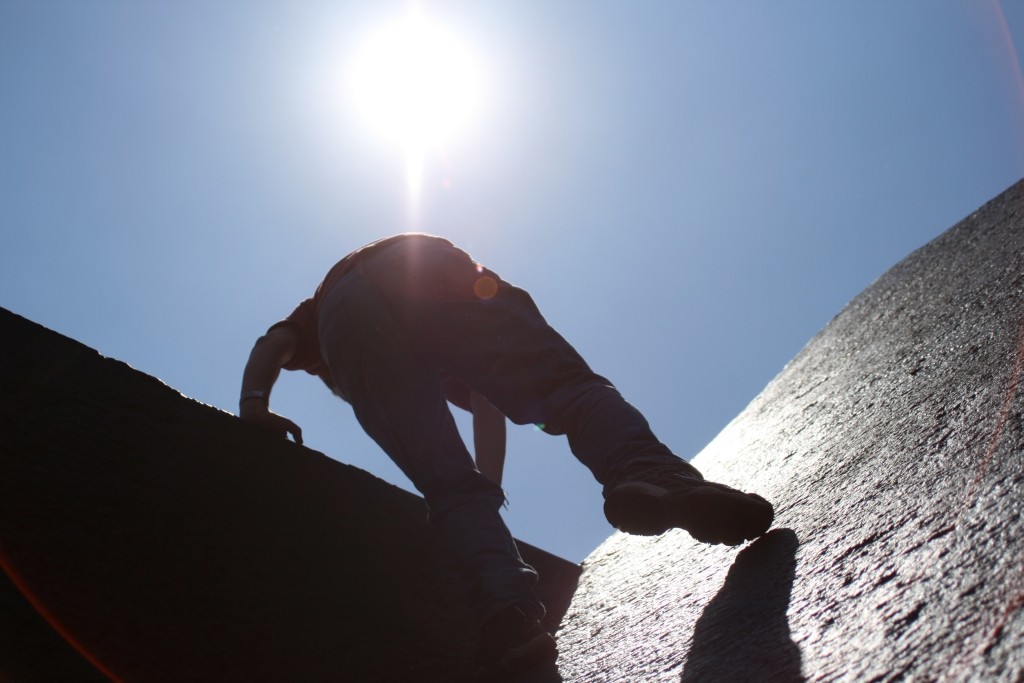 Editor’s note: Elisa gave this drash at the yoga practice on Saturday Ocober 28, 2017

First, with thanks to Rabbi Aaron Panken, President of Hebrew Union College-Jewish Institute (HUC-JIR), who wrote the commentary upon which this short drash and our yoga session today is based.

We begin with: God told Abram in this Shabbat’s parsha, Lech L’cha, “go forth from your land, your birthplace, your father’s house, to the land that I will show you. I will make of you a great nation, and I will bless you…”

So, when Abram received this instruction, he was just hanging out, comfortable, secure, in the land where he was born, in his father’s home. Then, presto, God asked him to uproot himself. Move on.

Yes, God promised Abram greatness in the new land, but at the same time opened the door to guaranteed stress for Abram, the stress of a strange place, the stress of immersing oneself and one’s family in a new culture. For a pretty nonspecific and rather grandiose sounding upside, God was asking Abram to innovate, to take unknown risks, to try something new. What Abram wouldn’t have known then, is that by gambling what seemed to be everything, he would indeed move beyond where he might have ended up in life and establish a people, a nation, that would continue beyond his own lifetime.

Two nights ago, I had a phone conversation with a friend of one of my kids, who was seeking career guidance. We might as well have been re-enacting the likely emotional turbulence of Lech L’cha. Instead of a phone call with Abram, I was confronted by an earnest, anxious 32-year old digital marketer who had successfully worked for the same company almost since graduating from college. Now she had an offer from a new firm, a start-up like her last, with an enticing promotion, more money, and more challenge. She was almost on the verge of calling the recruiter and saying “yes!!”. But, as she told me tearfully that night, I really love my co-workers and what if I don’t find the same chevre at the new place? (She may not have used the word “chevre.”) And, yeah, she said, the offer letter is tantalizing, but what if the job doesn’t turn out the way it reads? I, nor could anyone else, give her the assurance she was looking for. I didn’t know the company (just like Abram didn’t know the land that God was going to show him). I did say to her as tactfully as I could, sometimes in life you just have to go for it, even if that “it” may not work out. Staying where you are, just like Abram ensconced in his father’s house, is the comfortable choice. But, if you take that default option, you will pass up the chance to upgrade your skills, and never know whether you were capable of meeting the greater challenge, possibly setting yourself up for an even better opportunity later in life. And, although I didn’t say this, if you choose not to take this job, you will have to live with the thought that fear and anxiety is what may have prevented you from taking a risk, from moving on.

Rabbi Panken tells of a contrasting instruction from God, this one to Moses. Unlike Abram, Moses was continually moving from place to place in the desert, unsettled. He sees a burning bush, and from there, the voice of God emanates. Moses, Moses, God says. Here I am, Moses answers, but then God pushes him back. Do not come closer!, says God. Remove your sandals, for the place on which you stand is holy ground! He continues, “I am the God of your ancestor–the God of Abraham, the God of Isaac, and the God of Jacob.”

Panken says that Moses, as opposed to Abram, is told to slow down and connect with the earth, connect with where he is at that moment. Stop running, God says, and see what the world around can offer. “Moses, the ultimate nomad,” writes Panken, “needs to stop and smell the roses” so he can “activate his covenant with God,” the God of his forefathers.

Panken’s point: Sometimes we need to heed the equivalent of God’s call to Abram, to embrace the new, no matter how scary, and assuredly, it will seem scary. At other times in our life, as Moses found, we have to stop running after the newest, the next best, and “kick off our shoes and revel in all the good that has been handed down to us from generations before.” It is up to us to look internally, to evaluate objectively without angst obscuring our decision, before deciding whether to move forward or not.

What does this mean for our yoga practice? We will experiment with answering God’s call for us to take risk through the physical act of moving forward, through forward bends, and we will approximate God’s command that we cherish where we are now and our traditions, through gentle backbends. Our job is to decide off the mat for each of us when it makes sense to embrace innovation, change, take risk, and to know, at other times–without the interference of anxiety– when staying put, when valuing what we have, is the right move.

Quotes that helped end our practice:

“People often avoid making decisions out of fear of making a mistake. Actually the failure to make decisions is one of life’s biggest mistakes.” – Rabbi Noah Weinberg.

“If you are not a better person tomorrow than you are today, what need have you for a tomorrow?” – Rebbe Nachman of Breslov

Do one thing every day that scares you. – Eleanor Roosevelt

Image:  “Climbing” by Esparta Palma is licensed under CC BY 2.0