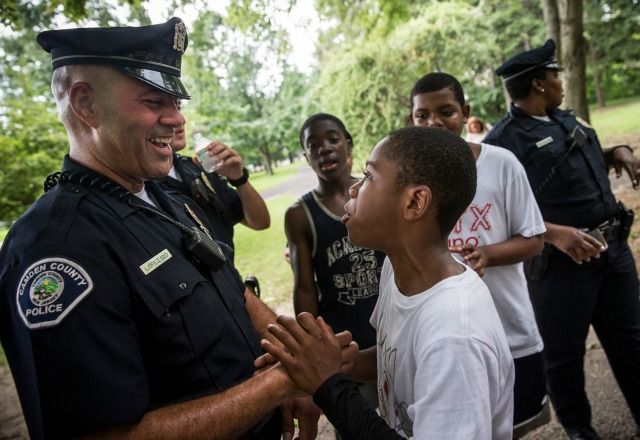 So you’re driving along with your beloved – maybe on the way to a movie or something. All is well. You’re talking about this and that. You approach the quiet intersection and the light turns red. But you give some gas and make the turn.

And then you hear the siren and see the flashing lights drawing up behind you. Your spirit sinks. You pull over. You are in a foul mood now. Maybe your beloved shoots you a look or lets out an expletive. Who are you more upset with? The officer, your beloved, or yourself?

Slowly, as if to torture you, the officer takes their time getting out of the car and ambles, sooo slowly, over to your window. You know the drill. You are genuinely abashed. Excuses and apologies are mumbled. The officer notices that your name is the same as theirs. The officer has checked you out. Your record is clean. After some chit chat the officer gives you a stern warning, returns your papers and tells you to go on your way and drive safely.

Well, you have missed the start of the movie. Now what? Go to dinner together? But maybe feelings are still a little sore over this close call. It takes a bit, but eventually your good fortune sinks into your consciousness. You’ve dodged that one. The relief turns to laughter. As the verse puts it, “You have turned my mourning into  dancing for me; You have loosened my sackcloth and covered me with joy.” (Ps. 30:12)

I think that many of us have lived or at least heard about such stories. Did they happen just this week, or years ago; in town, or while on a vacation trip in a faraway city? We are familiar with all kinds of versions of such stories, presented in granular detail or judiciously edited. We have heard all the variations. But there is one variation I have never heard. And I’ll bet that no one here has heard it, either:

I have never heard of a case where a person was caught speeding or running a red light, and after being given a warning rather than a ticket, protested to the officer – “No! I insist on getting a ticket – and points! This is a nation of laws!”

No, I have never heard of such a case.

“Let us declare the awesome holy power of this day – unetaneh toqef q’dushat ha-yom – for it is terrifying and fearsome.” The Unetaneh Toqef prayer occupies a central place of honor in our High Holy Day liturgy, and it presents a stark statement of what this moment is about.

Yom– The Day of – Ha-Din – the Law. That is one traditional name of Rosh Ha-Shanah.  Yom Ha-Din is often translated as “The Day of Judgment” for it refers to a day when the law is not so much promulgated or studied, but, rather, on this day it is  applied, it is enforced, it  is put into force  – in judgment.

All of us are guilty of infractions of the law, big ones or little ones, pre-meditated ones and accidental ones. A true judgment of the law would administer a guilty verdict to every single one of us. This is a world of laws. So says the prayer.

As we consider our present situation, socially, politically, morally and spiritually, we may question whether this traditional picture of the law and its application is really the picture we carry around with us.

Let’s start by considering this question from the American angle.

The law is present in our lives in different ways. Fundamentally, most of us see ourselves as decent, law abiding citizens. We accept that there are laws that govern our behavior and we mostly adjust our behavior accordingly. As long as we don’t come in conflict with the law, the law is actually an irrelevancy. It is practically non-existent for us.

But sometimes we do have a conflict with the law. We don’t like paying taxes, but we get on with it, (or at least most of us do) – although we try to do the absolute minimum, and we appreciate the possibility of getting around the law and of outsmarting the law.

We don’t like parking rules. When we park illegally and don’t get caught we are delighted.

But why would we do such a thing, in the first place? Well, we break the law out of all kinds of motivations. The more innocent ones include believing that our crime is harmless. Our infraction is meaningless, rendering the law that forbids it meaningless.

More serious motivations include some kind of conviction that the law is wrong.

We may believe that the law is wrong as it applies to us, alone – we will not let the law stand in the way of our gaining a particular benefit –  as, for instance in that parking decision we made, or when we jay-walked last week. And sometimes, more radically, we may come to believe that the law is fundamentally wrong – for everyone. We apply a different –a higher – set of laws by which we judge the official law to be void.

In all these examples it turns out that we have very little use for the law, the law as it is officially promulgated. We hold ourselves above the law, capable of deciding when and where it may apply or not. Since we judge ourselves to be basically good people, we endow ourselves with an inherent dignity that supersedes any other judgment imposed from outside of ourselves. We are the law  – we make the law and we judge when to enforce it and when not to.

But how far are we willing to allow such an attitude to become the commonplace approach to the law? How comfortable are we with allowing everyone else to feel that same sense of mastery over the law? Here is where it gets tricky. We are concerned about how much we may be affected by a casual autonomous approach to the law by others. If we don’t feel any bad consequences, we may be ready to “live and let live.” But if we feel that we are getting hurt, then we want the law respected.

Let’s return to our story. We don’t respond to the officer by insisting that, for the sake of the bigger picture, for the sake of maintaining a society that is safe and livable, we must get a ticket, for we must be a nation of laws.

Why not? I think it is because our experience with that officer of the law opens up for us a very complex and deep notion of the kind of protection the law should afford us. When that officer shows discretion and lets us off with a lecture, we may feel the delight of the escaped prisoner who has eluded the dark power of their jailer. But it is also possible that what we feel is a sense of relief and even gratitude. The officer has had compassion for us!

But, in showing compassion, haven’t they broken the law, also? So that makes two of us, the driver and the officer. We share a bond of recognition. We have discerned that each of us is a decent human being. I, the driver, am not really a criminal, and I, the officer, am not a sadistic robot mindlessly enforcing the law. The law has a human face.

The protection it offers comes in the form of a word of advice rather than a harsh punishment.  Under the protective embrace of such a law of compassion, we can share a sense of trust.  And as long as we trust each other, we don’t have to be a nation of laws; we can be a nation of gentle, loveable outlaws! We can hold off enforcing the law for only when we really need it.

When is that? Or, to put the question a bit differently – Who gets included within the web of folks for whom the law does not need to be enforced, and who does not get included?

So here is where another element comes into play. This is the question of “desert” – no, not the chocolate fudge sundae kind – but the question of whether we feel that someone else deserves the same standing that we grant to ourselves, whether they deserve to be included. It turns out that we may not feel that everyone deserves the protection granted by compassionate law. Then we reconceive our notion of the law. In order for the law to be an instrument of protection for us, it must become an instrument of punishment for others. (Those of us who read Just Mercy, by Bryan Stevenson, with our Book Club partner, the Presbyterian Church of Upper Montclair, know that this is a chronic and systemic failure in our society.)

If we don’t like that other person, or that other group, or what we think they are doing, then, suddenly we call for “throwing the book at them.”  After all, we are a nation of laws!

The great teacher, Rabbi Abraham Joshua Heschel, explained his own move out of the ivory tower of the Jewish Theological Seminary and into the streets, to fight for civil rights and to fight against the war in Vietnam, with these words:

“The more deeply immersed I became in the thinking of the prophets, the more powerfully it became clear to me what the lives of the Prophets sought to convey: that morally speaking, there is no limit to the concern one must feel for the suffering of human beings, that indifference to evil is worse than evil itself, that in a free society, some are guilty, but all are responsible.”  (“The Reasons for My Involvement in the Peace Movement“, 1972); later included in Moral Grandeur and Spiritual Audacity, 1996).

We are all, indeed, guilty – guilt is a universal, human reality, not a quality that is attached to only some people. We need to be afraid of all of us, including ourselves, and not of “them.”

We are all of us guilty – that is – until we are forgiven, until mercy and compassion overthrow our guilt.

So, then … if our guilt is universal, mustn’t God’s compassion be all-encompassing, as well? If all are guilty then all deserve compassion.

But are we, perhaps, afraid that there is not enough compassion to go around? If compassion is a zero-sum game, then we must each fight for our share and too bad for the losers!

So that we not fall into that repugnant view, our prayers seek to reassure us of this fundamental truth: Ha-Shem, Ha-Shem, El rahum v’hanun… v’rav hesed  – that God has more than enough compassion for everyone. God’s compassion for others will not cost me an ounce of exoneration.

As we leave here today, I ask – please offer a word of greeting and thanks to our security personnel – and please drive safely.