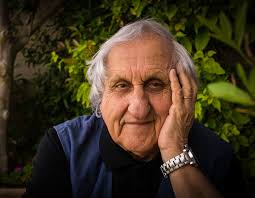 A.B. Yehoshua, Israeli literary giant and ardent humanist, dies aged 85. This headline from The Times of Israel sums up the life of one of Israel’s foremost authors.

A.B. (Abraham Gabriel, called Boli)) Yehoshua was born in Jerusalem in 1936. His father, an author and translator, was a fourth generation Jerusalemite while his mother was a Moroccan immigrant. This “mixed” marriage was not successful leading Yehoshua to vow that his marriage would be for love.

The writer, essayist and playwright was a staunch Zionist and defender of the State of Israel. His literary influences, however, were international: Franz Kafka, S.Y.Agnon, William Faulkner.

He was the recipient of multiple literary prizes including the Bialik Prize and The Jewish National Book Award among others. His entire body of work was short-listed for the first Booker International Award and has been translated into at least 28 languages. Many of his books have been adapted for the screen, both large and small, as well as opera and theater. Two books, both about Diaspora Jewry, remain to be translated into English.

Israel President Isaac Herzog stated that Yehoshua was “one of Israel’s greatest authors in all generations, who gifted us his unforgettable works, which will continue to accompany us for generations.”

Yehoshua said of himself “[Diaspora Jews] change [their] nationalities like jackets. Once they were Polish and Russian; now they are British and American. One day they could choose to be Chinese or Singaporean…For me, Avraham Yehoshua, there is no alternative… I cannot keep my identity outside Israel. [Being] Israeli is my skin, not my jacket. (2008)

Check out one of Yehoshua’s works available in the Lampert Library, Including are award winning novels Five Seasons, A Woman in Jerusalem and The Liberated Bride.