To close out March, Women’s History Month, this column features a new book on a much discussed topic: stolen art. It’s common knowledge that many outstanding private art collections were confiscated during World War II.

Unfortunately, many paintings – especially those defined as “degenerate”- were destroyed. However, many others were

designated to be part of Hitler’s museum in his hometown of Linz, Austria, while others became part of Nazi higher-ups’ private collections. This Fuhrermuseum was to focus on European representational art with the Ghent Altar piece as the centerpiece of the collection. In addition, there was also going to be a wing of degenerate art featuring abstracts, cubists, impressionists and the like. 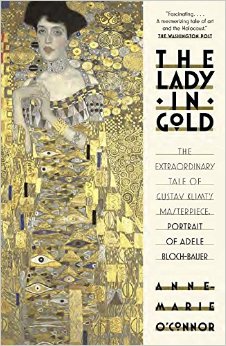 Among the most notorious of the paintings and one which has had much publicity in the last few years is a small collection of Gustav Klimt paintings owned by Ferdinand Bloch-Bauer. What made these special was that they were portraits of his wife, Adele. First looted by Nazis, the paintings eventually became the property of Austria.

I remember the first time I saw this Klimt painting. It was only a postcard, but the gold, the detail, the essence of the painting and the woman painted still shone through. This was something special. No wonder it was confiscated

However, with greater transparency in the years since the war, it was determined that Bloch-Bauer had not left the paintings to the government. His niece, Maria Altmann, eventually sued to have the paintings returned to the surviving family-namely her. This is recounted in the 2016 film, Woman in Gold, starring Helen Mirren.

The fascinating story of this painting, and the struggle to return it to the Bloch-Bauer family, is recounted in several books.

Lady in Gold: the extraordinary tale of Gustav Klimt’s masterpiece, Portrait of Adele Bauer-Bloch by Anne-Marie O’Connor is “the galvanizing story of Gustav Klimt’s 1907 masterpiece—the breathtaking portrait of a Viennese Jewish socialite, Adele Bloch-Bauer. The celebrated painting, stolen by Nazis during World War II, subsequently became the subject of a decade-long dispute between her heirs and the Austrian government.” (Amazon) There are many photos. 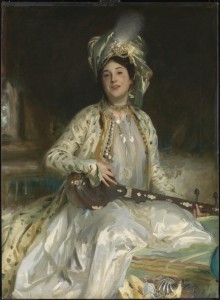 Klimt painting, its subject and its creator.

Jewish women have also been the subject of other famous portrait painters. John Singer Sargent, the American expat British painter, is well known for his painting of Mrs. Carl Meyer and Her Children which was featured at an exhibit at the Jewish Museum not too long ago. Another painting by Sargent is Almina, Daughter of Asher Wertheimer which shows Almina dressed rather exotically in a semi-Oriental costume including a turban. 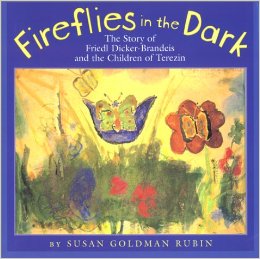 Lastly, tribute should be paid to artist Freidl Dicker-Brandeis. Her story is told for young readers in Fireflies in the Dark. This remarkable woman had studied art under many luminaries including Paul Klee. When she and her husband were deported to Terezin in 1942, she used most of her baggage allotment for art supplies. As an artist and teacher she anticipated being able to help the traumatized children through art. When she was deported from Terezin, she took the two suitcases that had held her art supplies and filled them with the work that the children had done. They were found after the war and became the illustrations for the extraordinary book I Never Saw Another Butterfly.

Take a look at this extraordinary book filled with poems and pictures by Terezin’s children. Each painting by every child was signed. Life may be short, but art is long. This is how we remember those children and their dedicated teacher.