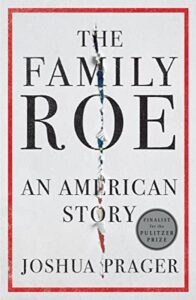 I want to bring to your attention a most timely book. The Family Roe by Joshua Prager is not a “Jewish” book. However, the topic of abortion is of interest to many Jews and is, in fact, a Jewish topic.

Indeed, at the Shavuot tikkun, one of the study sessions was on the Jewish texts that dealt with abortion.

The Family Roe is a big book. There are more than 400 pages of closely written text and over 200 pages of notes. However, though highly detailed, the book reads easily because of the narrative nature of the story. 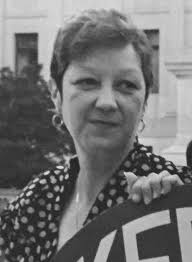 Prager has started at the beginning of the Roe vs Wade saga with the story of Norma McCorvey and her extended family. The story ends with Norma’s death and legacy.

There are many myths and misunderstandings about the woman whose name is on the Supreme Court ruling. In fact, McCorvey never had an abortion: she had three daughters, all of whom were given up for adoption. McCorvey herself is a complicated figure from a complicated family.

But the book does more than analyze this woman. It also looks at all the supporting characters and events in the abortion drama: the lawyers; the doctors  who made it their mission to provide this service;  the ministers and priests who wove in and out of McCorvey’s life; the friends and pseudo friends; the politicians and the users and abusers.

Prager makes the reader see all sides of the Roe story- Norma’s story – and, as best he can, he is objective or at least sympathetic.

Norma was not an especially admirable person. But after finishing this book, the reader comes away with a more rounded picture of Roe vs Wade and the real people behind it.

Prager was supposed to discuss his book at a Nourish session but was forced to cancel just as the Supreme Court discussion of the case was leaked. Hopefully, he will be able to reschedule.