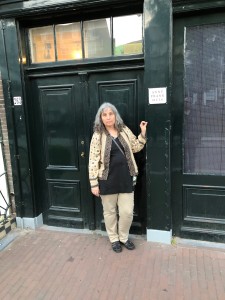 t is called the Anne Frank House but it was not actually her home. The buildings housed her father’s company and Anne, together with her family (father Otto, mother Edith, sister Margot) and 4 other people, hid in the top two floors of the back annex above the warehouse for 2 years.

The entire building is empty. No furniture – the Nazis removed everything and Otto Frank did not want other furniture brought in to recreate the space. Only a few personal items have survived – postcards and magazine photos that Ann glued to her bedroom wall, a shopping list, Edith Frank’s siddur.

There is a constant stream of visitors – 10 allowed in every few minutes, from many nationalities (there were audio-guides in at least 20 different languages). The atmosphere is hushed, only a few brief whispered comments as everyone slowly moves through the space. We start in the office; there are excerpts from Anne’s diary and photos on the wall – of the 8 people hidden in the annex, of the 4 people who helped them hide, of the furnished offices, and the warehouse below. The audio-guide starts playing as you enter each room – you find out about the effort it took to prepare the secret annex and provide food and other necessities over the two years they were in hiding. And you hear a young girl’s voice reading from Anne’s diary.

We enter the annex, through the now open bookcase doorway. The space is cramped, like a tenement apartment on the lower East Side of New York. It would have been filled with eight beds (2 in the kitchen/common area, one under the ladder to the attic) a few dressers and shelves, a kitchen table, chairs. Cocooned from the outside world, seemingly safe but needing to be constantly vigilant during the day when workers were in the building. The bathroom, for instance, could not be used during the day as the plumbing runs through the warehouse below.

I feel choked up, close to tears. Hearing about all the preparations and effort throughout those 2 years while knowing that they were found and arrested just 2 months before the war’s end and put on the last train to Auschwitz.

But I also feel troubled. It’s hard to explain why. The lens feels too narrow – this is an intimate memorial about one girl from her father. We find out very little about the other people who lived in the annex with Ann or about the people who helped them. There is a brief mention about what happened to the other people who were hiding – the places and dates of their deaths (2 died in Auschwitz, 5 were transported and died elsewhere, only 1 survived) although not how they died – and we do not find out what happened to the people who helped them hide. There was mention of a transit camp – Westerbork – where they were sent before being deported to Auschwitz. I didn’t know there were camps in Holland. I want to know more.

Anne’s diary, just because it was a story about one ordinary person just like us, made people aware of the Holocaust. In our own time too, people have become aware about what’s happening to refugees and asylum seekers by hearing stories about individuals in the news. Individual stories are important but they can also mislead us. The Anne Frank House is the third most popular site in Holland, visited by millions of people. But it tells only part of the story about what happened in Holland during WW2. I grew up believing that Holland protected its Jews and the Anne Frank House lines up with that narrative. But being in Holland, I am finding out other things that don’t fit so neatly into that narrative.