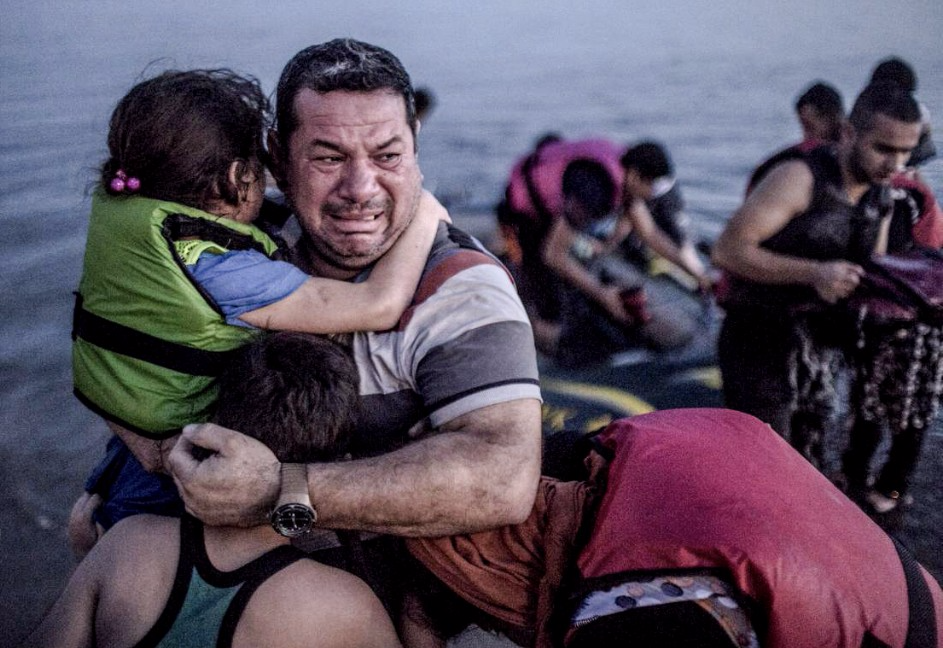 A Syrian refugee from Deir Ezzor, holding his son and daughter, breaks out in tears of joy after arriving via a flimsy inflatable boat crammed with about 15 men, women and children on the shore of the island of Kos in Greece

Over the last several weeks readers of our Torah portions have been struck by how strongly they speak to our present situation in the United States. The political and societal developments of our moment exert an irresistible pressure upon us as we read the story of the collision course run by a powerful leader of a powerful nation against the Eternal God Who stands by the enslaved, the downtrodden and the weak. We read of different persons who must choose which side they will join, who must decide what is right and what is wrong, and whether they are willing to fight for their values or join those in power who seek to oppress, enslave and even murder those they fear.

Our portion begins with God explaining to Moses that God has “hardened the hearts of Pharaoh and his servants.” (Ex. 10:1) I have written before about the challenging concept of “hardening or heaviness of heart.” How can Pharaoh be condemned for his intransigence if he is being forced into it by God? (See Sparks for Va’era, 2015) We should notice that the common assumption that the hardening of one’s heart thereby deprives a person of the ability to change their mind is contradicted in our Torah portion. Pharaoh and his courtiers are equally described as having their hearts hardened. Yet, a few verses later, the courtiers implore Pharaoh to give in to the demands of Israel’s God. (v. 7)

Along with the courtiers, after they have a “change of heart,” I have also wondered how Pharaoh could constantly make choices that not only obstructed the Israelites’ yearning for freedom, but also caused pain and suffering for his own people. In the past I have thought that this is a sad result of human beings getting caught in a confrontation and losing their faculties of reason. (See Sparks, Va’era, 2014)

But, as I live through present events, a frightening idea has dawned on me. Our Torah story presents us with two types of hard-heartedness. The courtiers exhibit the tragic propensity of people who choose to go along with evil by blunting their perceptions of the suffering they see around them and by making excuses for the injustice done by those in power, hoping to benefit from their proximity to power. They finally change their position and beg Pharaoh to stop when they can no longer deny their own suffering. It may take quite some time, but finally their own pain – not the pain of others – becomes too much to bear and they challenge their boss.

Pharaoh’s hardened heart is of a different variety. The horrifying possibility raised by his continuous and conscious choices to make things worse for his own people as well as for Israel is that Pharaoh’s concept of wielding power is tightly and precisely entwined with an embrace of sadism.

Pharaoh is not simply opposed to setting the Hebrews free. He is not simply an unwise leader clinging to power. He is not merely incompetent. He really needs to impose suffering on his own people in order to confirm to himself that he is in charge. He needs to see the immediate results of his orders, creating chaos and suffering, so that he can reassure himself that his orders make a difference. Pharaoh is not incompetent or stubbornly unwise. He is a sadist.

This sharpens our understanding of the opposition between Pharaoh and God. God keeps reminding us in these episodes that the Divine Name operating here is the four-letter name, YHVH. Our Sages understood the profound meaning of this name as referring to God as the Compassionate One. Through the ages many have remarked at the paradox of this name being associated with a string of terrible plagues visited on a people. But, if we understand what this conflict was really about, we see that it pits two conflicting concepts of power. One is exemplified by a ruler who understands power only insofar as it can create confusion, dismay, hatred and suffering. The other is a Ruler Who exemplifies the power of Compassion and Solicitude. Tragically, it turns out that this was a conflict to the death.