“I tell you this to break your heart, by which I mean only that it break open and never close again to the rest of the world.”  -Mary Oliver

By show of hands… Has anyone here ever done something wrong, messed up, or made a mistake?

Okay, so all of us.  I mean, duh!  Why would we even need an annual day of atonement if we never did anything wrong?

And yet, while we may know that we’re all bound to make mistakes, how many opportunities do we really give ourselves to show people our imperfections, or at least the parts about ourselves that we think are imperfections?  And what happens when we do?

Many of you know that my husband used to be a high school English teacher.  Well, one year during his teaching career, right after giving a lesson on plagiarism and direct instructions on how not to plagiarize, he was horrified to find that several students turned in blatantly plagiarized papers.  We’re not talking an accidental lack of citation– we’re talking glaringly obvious direct copying from Wikipedia type of stuff.  He was livid.  He stood up in front of that class with their papers in his hand and thundered, “Listen, it is extremely clear that SEVERAL of you plagiarized your papers.  If those of you who did so do not come forward by the end of the school day today and admit that you plagiarized your paper, not only will I be notifying your parents and giving you a zero on this assignment, but I will also be notifying the owners of the websites from which you plagiarized to tell them that you stole their intellectual property, and their lawyers will be contacting you and your parents immediately.”

Guess which students came forward and apologized for plagiarizing?

Right– every single student in the class, even the ones who didn’t even come close to plagiarizing.  They were all so concerned that they might have plagiarized that they apologized, “I’m so sorry, Mr. Lucey, I think I plagiarized my paper too.”

I wasn’t a fly on the wall when this happened, but when I imagine this communal confession, though an accidental one, it bears a pretty striking resemblance to Yom Kippur.  We use plural language although we know that we as individuals didn’t literally commit all of the sins that we list.  We each beat on our own chest for each sin, regardless of whether we committed that particular sin or not.

So what happens when we sit in a room (or a tent!) with a group of people confessing in a communal “we”?

The communal aspect alone of this action is worth considering.  Joey Weisenberg who came to daven and teach here at Shomrei a few years ago describes in his book about building singing communities that we create an intimate connection by singing closely together and responding to each other in real time.  And beyond the sense of connection, even scientifically there is an intense physiological response that has been studied.  Scientists have shown that choir members’ and even concert-goers’ hearts actually synchronize during a rehearsal or a performance.  We can imagine this is even more heightened when there is a religious or close-knit community component to this type of experience.

But this could happen with any type of shared prayer, so beyond the emotional and physiological and (maybe!) spiritual sense of togetherness and connection, what about the Yom Kippur liturgy, confessing our sins together, intensifies the connection in the space we share during this day?

Like with the plagiarizing confessors, sometimes we’re not even really one hundred percent sure whether we are guilty of a certain thought or action.  But by confessing together, maybe we have a realization that we could be sitting next to or down the aisle from someone who did commit that sin.  Possibly someone we know.  Which means that possibly someday, we might.  We’re only human, just like the person sitting next to us.  It’s a reminder that while we obviously don’t wake up in the morning thinking “How can I mess up today?” we’re always teetering on the edge of doing something wrong.  Being vulnerable enough with one another to express this possibility perhaps can open our hearts up to empathy for others and also maybe a bit of forgiveness for ourselves– reminding us to judge one another less harshly and maybe judge ourselves less harshly.

Many of us at one time or another have had the experience of hearing something that we can relate to but had kept to ourselves, and we’ve thought to ourselves, “Oh I thought I was the only one who felt that way!”  Sometimes it’s less about something that we did “wrong,” but something that we didn’t realize was okay to talk about.  Something that either we aren’t comfortable with about ourselves, or something that we think society may not be comfortable with about us because it hasn’t been normalized; maybe no one else has been vulnerable enough to say it yet.  This is why public vulnerability really matters.  Representation really matters.  When we hear stories similar to our own, we too may feel more comfortable knowing that actually, these things that we weren’t comfortable sharing about ourselves are a common part of the human experience.  When we don’t see ourselves represented, we often hide.  We can turn our own negative thoughts over and over in our minds until we think that there’s something wrong with us or that we’re going to be judged for who we are, rather than accepting being a part of the human experience.   TaNaKh is full of figures whose humanity is exposed for us to read and study over and over.  I’ve often heard our Biblical ancestors’ behaviors interpreted as a lesson in “what not to do.”  But maybe it’s not so much that they’re a lesson in “what not to do” and more of a lesson in understanding human existence.  We’re all going to make mistakes.  And we all have things about ourselves that we’re not comfortable with or that we think society will not be comfortable with.  But we can turn these things over and over in our minds until they eat us alive, or we can take a really vulnerable risk and share our experiences with others.  Queen Esther is vulnerable– she could be killed for expressing who she really is.  Yosef, in a moment of raw emotional vulnerability, tells his brothers who he really is.  Yosef’s brothers, for that matter, coming to him in the first place even not yet knowing who he is, are in a vulnerable state.  Jonah may run away from his responsibilities at first, and yet he does say, Throw me overboard, guys!  I know I’m the cause of this storm.  Moses’ vulnerabilities as a leader have been studied to no end; he shows us on a very human level how imperfect even our greatest leaders are.  The list goes on; we could study the humanness of each Biblical figure forever, because the information that we have about them is laid out for us in black and white.  To an extent we living humans still have a choice about how vulnerable we would like to be.

During this time of year we say that the opportunities we have to do better are expressed in three ways: “t’shuvah, t’filah, tz’dakah.”  Each of these is extremely vulnerable.  T’shuvah leaves us vulnerable on both sides– apologizing to someone, admitting that we’ve done wrong, and hoping for forgiveness, acceptance for being the mistake-makers that we are?  And on the other side, have you ever had that experience where someone apologized to you and you felt a little awkward?  Having someone expose their vulnerabilities to us is no small responsibility, whether or not we choose to forgive that person (and I do firmly believe that we have a right to not forgive someone, by the way).  T’filah, prayer: oof– the intense vulnerability of prayer, well that’s a whole other sermon, but suffice it to say it’s vulnerable and exposing.  And lastly, tz’dakah: choosing to help someone in need, giving of ourselves, opens up our hearts (and open, loving hearts are vulnerable hearts).  Not to mention the vulnerability of the flip side of this– accepting tz’dakah.

We are encouraged to be vulnerable.

You know, we’re really great at celebrating each other’s accomplishments.  It’s easy to express to someone, “Hey, I heard you did really great on that school project!” “Hey, I heard you did really well at work and got that promotion!”  But that’s not the only way to connect with one another, and maybe this isn’t the deepest form of connection.  Brene Brown says that “Vulnerability is the birthplace of love, belonging, joy, courage, empathy, and creativity. It is the source of hope, empathy, accountability, and authenticity. If we want greater clarity in our purpose or deeper and more meaningful spiritual lives, vulnerability is the path.”

So, what if we don’t just want to the validate the good stuff in each other; what if we also want to validate the imperfections and normalize our ability to talk about the things that we’re less comfortable with about ourselves?  It allows us the space to say, “Oh, you’re struggling with that?  Know what?  Me too.”

They say that while what we do during these days of t’shuvah matters, what matters at least as much is what we do with the rest of our year.  May we be inspired to be vulnerable with one another not just on the Day of Atonement, or during this period of T’shuvah, but throughout the year, to be vulnerable with one another, to open up our hearts, to tap into the vulnerability that makes us human.

“I tell you this to break your heart, by which I mean only that it break open and never close again to the rest of the world.”  Amen. 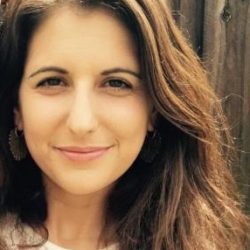 Lily Lucey
Lily is an Assistant Education Director at Shomrei. She served as B'nai Mitzvah Teacher & Coordinator, prayer and song leader, cantorial soloist at synagogue and community events, religious school music teacher, and was often involved with synagogue and holiday programming. She is passionate about teaching Torah and Haftarah trope and Shabbat t'filot to students and their families with the hope that they will carry these skills with them for their future participation in synagogue life.Her husband Keith is the Northeast U.S. Manager for Cambridge International Examinations, a division of University of Cambridge. They have one six-year-old son, Zen.