In all other years, we would go to a family seder at my sister’s home and have a second seder with some family and some friends at our home. This year would be different.

We were still planning a family seder with my sister and brothers and their families … but we would not be together in the same house. We would still use the family haggadah that Lou and I put together almost 20 years ago and promised to update every year … but this year we would finally get around to changing it – keeping in all the essential rituals, eliminating many of the extra readings while adding in a few new ones that seemed especially peritnent to the current situation, and adding in questions (labeled as “Food for Thought”) to reflect on how the pandemic affected our perspective of the Passover story we read each year.

And then, out of the blue, I got an email from my cousins Jay & Raff – two of the cousins (the children of my mother’s younger sister) that I had celebrated Pesach with every year growing up but whom I had not been in touch with for many years:

“I hope you are staying safe during these interesting times. My school district has been doing virtual learning the past two weeks with no end in sight.  Many teachers are using video conferencing to deliver instruction.  It gave me the idea of having a virtual Passover via Skype or Google Hangout Meet.  Raf and I have talked about it and it would be great to have our cousins join us.  Let me know what you think.”

To which I responded:

“Great to hear from you. Montclair State is also fully on-line. I like the idea of a big family seder. The Eisenberg contingent is planning a Zoom seder for the first night. The plan is to have a 1-2 hour session that includes the rituals, discussion, and some songs (no need to watch each other eat). Lou & I will be leading and sending out the invite. I was planning to use Zoom. Do you all want to join us?”

And then, not only did I invite Jay and Raff, but I reached out to their siblings and to the other cousins (children of my mother’s older sister) who had also been at my family’s seder each year. We ended up with 29 people attending from 17 different sites. It was wonderful. And a family reunion is now being planned for when we can all be together in person. 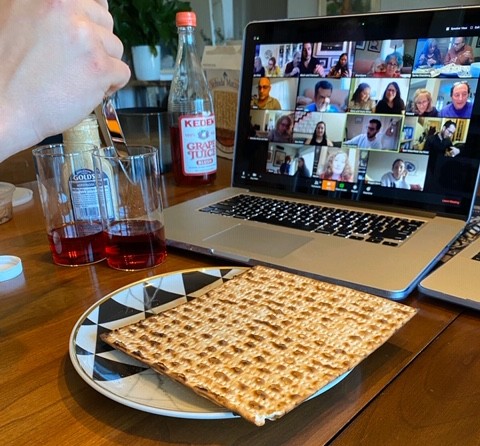 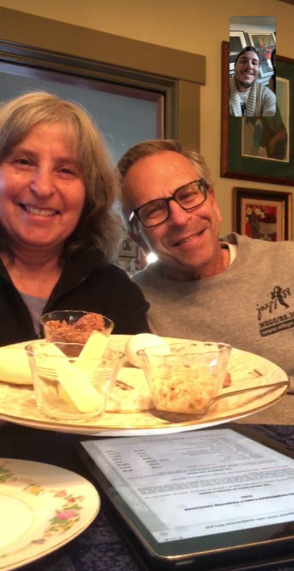 The second night we had a second seder over face-time with just Moish and Charissa. So you have to know that I have never been to a seder with less than 10 people (and never hosted one with less than 16). Well, going through the rituals and talking about the meaning of the holiday with just the two of them was amazing!

When we got to Maggid, Lou and I told the story rather than reading it, with Moish asking about details that we had neglected to include.

For Shulchan Aruch, we shared a face-time meal that I had prepared earlier in the day and Lou had delivered.

And about those questions I had inserted into the Haggadah … 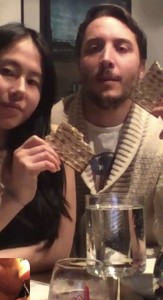 In response to “Why is having this seder (any seder) important to you (this year)?, Charissa replied “We want to pass this on to our children, just as you are passing it on to us”.

In response to “So now that we have listed all 15 traditional parts of the seder, what parts are the most memorable to you?
Moish: the maror
Charissa: telling the story
Moish: “when Dad reads the Hebrew [before eating the Hillel sandwich] and you join in at the end and say YOCH–LU–HU”.

And at the end of the seder when we talked about “Where would you like to be next year?”, they both responded “Hosting a family seder in our new home”.

Pandemic or no pandemic, it doesn’t get better than that.

One thought on “Pesach Silver Linings”