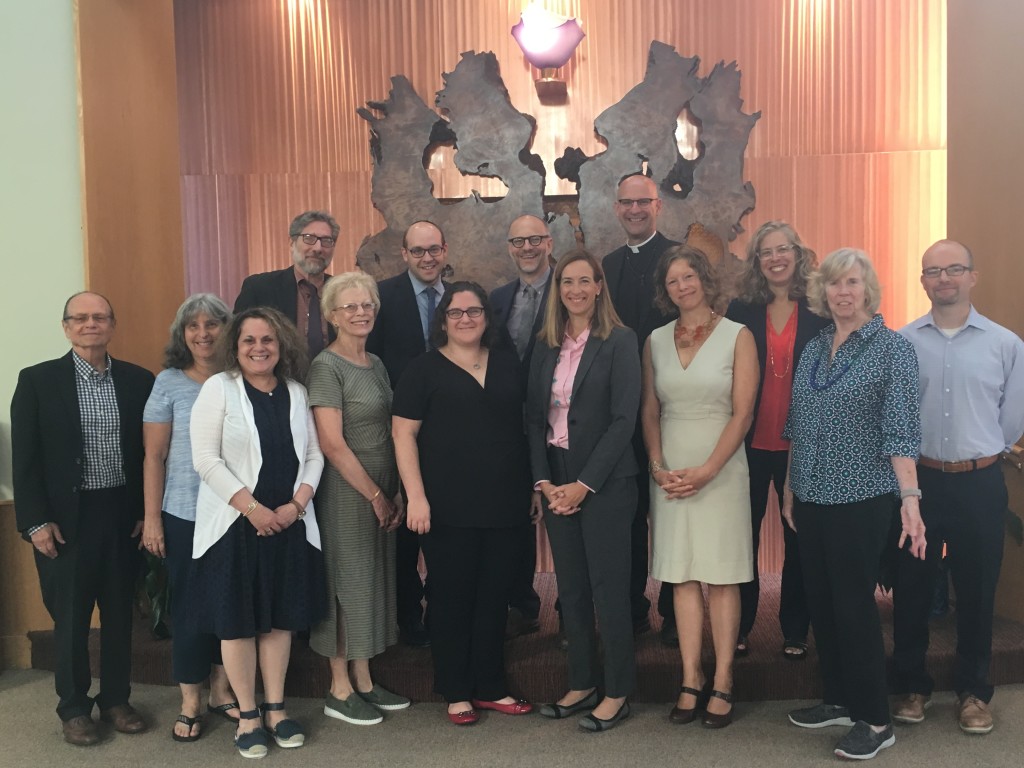 On a recent Wednesday morning, Rabbi Greenstein, Audrey Levitin and I joined the Montclair Sanctuary Alliance (MSA) in a meeting with Representative Mikie Sherrill, who represents the 11th Congressional District including part of Montclair. The overall message was that people in her state are eager to welcome immigrants as we have been doing for decades. MSA members discussed several issues with Representative Sherrill about refugee resettlement, asylum seekers, and conditions in the detention centers.

Regarding refugee resettlement, the group focused particularly on one group – Iraqis who had worked with U.S. troops as translators, guides, and informants. There are currently around 140 Iraqis undergoing the vetting process, which can take 18-24 months. However there are over 100,00 other Iraqis who assisted the U.S. who have requested resettlement for themselves and their family members. These Iraqis face imminent danger because of this involvement. We asked Representative Sherrill to consider becoming a member of the House Refugee Caucus. We also asked her to consider signing on as a co-sponsor of the GRACE (Guaranteed Refugee Admissions Ceiling Enhancement) Act to set the annual refugee admissions ceiling of 95,000.

Regarding asylum seekers, Reverend David Shaw of the Union Congregation Church had visited the border and described the terrible conditions that he saw there. MSA expressed concerns about the safety of migrants given the administration’s agreements with Mexico and Guatemala to keep them in those countries and prevent them from seeking asylum in the U.S. This contravenes our own laws as well as international treaties that uphold the fundamental right of individuals to seek asylum and for asylum seekers to have access to a safe, humane and legal asylum system. The group urged Representative Sherrill to support policies that support these rights and oppose administrative policies that do not.

The group then focused on conditions at the Essex County detention center in Newark. Essex County receives over $40 million from its contract with ICE (Immigration and Customs Enforcement) to detain asylum seekers in this facility. Most of those funds are not being used to support the detainees. Conditions in the detention facility are terrible and most detainees do not have legal counsel for their asylum hearings. Legal representation is crucial as detainees without a lawyer are have only a 3% chance of winning their case. The group asked Representative Sherrill to call County Executive Joseph Di Vicenzo and ask him to support the creation of a civilian oversight board, appointment of an independent civilian advocate, and funding for universal access to lawyers.

What you can do: Please call or write an email to Mikie Sherrill’s office to support our meeting and to demonstrate broad support for our requests. See the  suggested script below.

Aso please let us know if you are interested in joining the Social Action Committee.

If you participate in this action, please log your action here in this Google form so MSA can keep track of all the actions taken to support this effort.

Thank you for meeting with our clergy leaders and members of their congregations. We are grateful for your willingness to collaborate and advocate for refugees, asylum seekers, and immigrant members of our communities. I am writing/calling to express my outrage and concern about the low numbers of refugees being resettled in the US, the policies and practices that are preventing immigrants from seeking asylum, and the conditions for detained immigrants in New Jersey.

We stand with the committee of clergy in requesting the following actions from your office:
1) Speak out against the administration’s “Remain in Mexico” program and other administration efforts to block immigrants from seeking asylum.
2) Co-sponsor the Guaranteed Refugee Admissions Ceiling Enhancement (GRACE) Act which will set an annual refugee admissions ceiling at 95,000, the average goal set by administrations since the inception of the refugee program. Under the current administration, the ceilings for refugee admissions has been at a record low.
3) Become a member of the Bipartisan House Refugee Caucus.
4) Advocate with others to reform detention centers in New Jersey by:
– Advocating for the creation of civilian oversight boards;
– Appointing detainee advocates;
– Providing universal legal representation for ICE detainees;
– Plan a responsible transition out of the business of incarcerating immigrants.

As a resident of the 11th District, I demand immediate action to address these issues. I look forward to hearing about the actions you and your staff will take in the coming months.