I felt a little like a pioneer woman as I planned for Passover 2022. For the first time ever, I was spending the entire holiday outside my own home since I was finally getting to see my daughter and her family who live in northern France.

But first we had a pre-Passover Shabbat with hallah baking. Imagine that! Challah smells the same wherever you are. 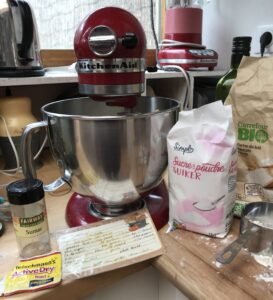 Like the women of  yore, we had to go elsewhere for some ingredients. We imported our pseudo brisket (poitrine – the taste was right but the look was wrong) from a butcher in Lyon as well as a chicken for the soup.

One market in Lille had some frozen kosher meat and other products but Rebecca said it looked like it had been there forever. Rebecca was able to get matzah and matzah meal and some condiments. I brought a real horseradish root, our beloved fruit jellies, and some other odds and ends. 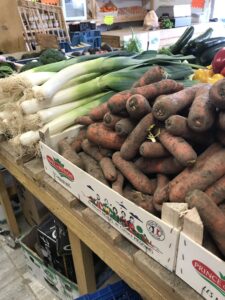 And we kept reminding each other that there was plenty of real food in abundance: bountiful spring leeks, endive and crisp fresh lettuces, carrots with real dirt on them, along with fresh from the farm eggs for Grandma Bessie’s 12 egg sponge cake.

I brought a pile of haggadot, lightening my return suitcase considerably, and we worked together to improvise and adapt.

Last year, the entire family, despite being scattered around the world, shared our seder over Zoom. This year it was wonderful to be in person but sad to miss the rest of the family which was again scattered but not sharing virtually.

Our guests were British colleagues of Rebecca – lapsed Christians who knew their Bible so the narrative and explanations made sense to them and led to questions. Everyone sang either from the Hebrew or transliteration. How good to be together sharing ancient rituals, family recipes, and French touches. 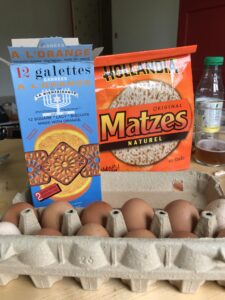 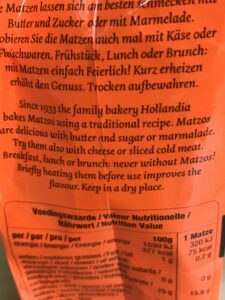 French matzah is not just for Passover. While in the US, markets trot out the matzah at every Jewish holiday, most European markets stock matzah all year. The matzah is a thin, light, crunchy cracker advertised as good for you. We found several brands in French markets as well as Dutch markets when we visited the famous tulip gardens.

Although we were doing some traveling, eating out was never an issue. In the more than 20 years since I’ve been visiting France on a regular basis, I have found that vegan and vegetarian options have become more common and the lovely composed French salads are always available. 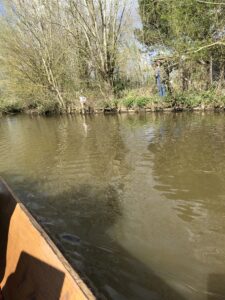 Passover proved NOT to be the challenge I expected. Although I was unable to attend services, I had one of the most peaceful Shabbats I have ever experienced. Rebecca and her husband recently purchased a small handyman special house in a nature reserve about an hour from Lille. Situated in the very small town of Clairmarais ( those of your familiar with the former Jewish neighborhood of Le Marias in Paris will recognize part of the town’s name Marais which means swamp)  The house is set on a piece of land surrounded by a small river, a pond and a canal. The land is man made, drained swampland, very fertile and serene. We ate Shabbat dinner outside among the wildflowers-really weeds – listening to the lap of the water, the quack of the ducks, and varied songs of the birds. People waved from boats as they slowly made their way past the house. The Shabbat candles shone from inside the house along with the yahrtzeit candles that I had brought from New Jersey and which provided the perfect segway into family stories about the people after whom Rebeccca and the children were named. I know that my parents would have loved the quiet beauty of this place and we all felt their presence.

Back in town to vote in the second stage of the national elections, everyone sat glued to the television. There was a first round a couple of weeks ago; on this Sunday, the two top candidates for the presidency were pitted against each other. But there were no loud rallies, billboards or nasty TV ads. In fact campaigning is not even allowed on the Saturday before and the day of voting.  The entire country votes at the same time and all votes are counted immediately by hand by volunteers.

Like New Year’s Eve at Times Square, the news channel counted down the time to 8 p.m. when the winner would be revealed. At precisely eight, two large photographs of the candidates appeared with their percentages. The current president was re-elected defeating the far right, zenophobic LePen. While Macron was not necessarily the choice of all who voted for him, this election showed that the far right, while growing, had not overtaken the more centrist, European community supporter, placing France as a leader in Europe for the next few years.

And then there are the quiet nights of  TV. I’m always introduced to something unique and new to me. In this case it’s the long running Japanese series Old Enough where adorable toddlers and preschoolers head out to do errands like buying groceries or visiting family shrines. Interestingly enough this series seems to have made an impact with articles about the show and Japanese versus American parenting styles showing up in the media. [See article in NYTimes].

In France, while you don’t see toddlers at the market, kids seem to be more independent than in the US. My twelve-year-old grandson goes to a magnet type school in a nearby town. Last year, once he was comfortable, he made his own way via Metro, train, tram and foot. Sometimes he meets up with a classmates but not always. He seems none the worse for this. My granddaughter walks to her high school but when teachers call in sick, there are no substitutes so the kids could have lots of unsupervised free time in their school day. Chaque a son gout – to each his own.

But one thing I’ve learned from my frequent visits to this northern, relatively poor part of France (although you can buy a kilo of leeks for a couple of Euros as opposed to the high cost of leeks at home) is that given the chance and a welcoming bon jour, people are actually very nice. In fact, it’s said that people in this part of France are the nicest in the country.

2 thoughts on “Notes from France”