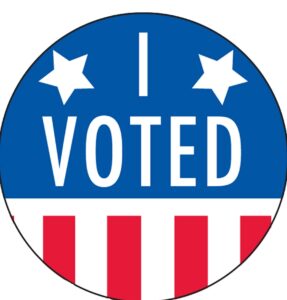 When my family moved to Montclair in 1975 , the first things we did were to change our address in the voting records and get library cards. I don’t remember where we first voted. It may have been Watching School, the school our elder daughter would eventually attend.

But the last many years, voting took place at Edgemont Park. The park house had everything; plenty of parking, the pond sparkling in the November (or whatever month the election was) sun, and a calm presence as one approached the desk.

Our voting location changed in the last few years to Edgemont School. Parking was more difficult, there were some steps involved and the intimacy of the park house was lost. But the importance of voting was still there.

Now that we have moved, we again have a new location: Glenfield School. But this year I took advantage of early voting which had all the advantages of in-person voting with the additional convenience of choosing a day and time. I drove a couple of miles up Bloomfield Avenue to the Verona Community Center -why don’t we have such a place in Montclair? A prominent sign on Bloomfield Avenue pointed out the location. There was plentiful parking. The process was smooth, and the poll workers could not have been more pleasant and helpful, even offering me a chair.

The experience made me think of a children’s book that I used to read at this time of year, The Day GoGo Went to Vote, a 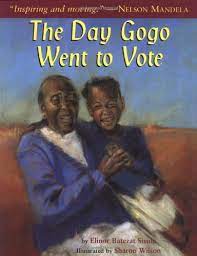 picturebook about an elderly South African woman determined to cast a vote for the first time despite long lines and hours waiting under a brutal sun. It also brought to mind the challenges some people have faced in parts of our own country in recent years.

I spent no more than 15 minutes in the process of voting and that included entering and leaving the building.

I remember how important and even monumental my first vote was. It felt powerful and positive. It was a thoughtful experience with choices to be made. Politics have always been partisan, but they were also patriotic in the best sense of the word. One tended to think about the candidates even if, in the end, the same lever was pulled.

Today, voting seems to be reactive rather than proactive. many of us are trying to prevent something from happening or someone from being elected rather than supporting a candidate and helping our country go forward for all. No longer -to paraphrase a former president- do we believe that there are good people on both sides.

Schools taught the power of the vote. Civics was in important part of the curriculum. Granted much of history was myth mixed with fact and flavored with a touch of jingoism. But we did know who the president was; we learned the names of the cabinet members and what they did; we recognized the names of the Supreme Court justices- white men all- and we knew every state capital.

I think some of this was just exercise but it also was intended to make us aware and be able to make choices, to understand how our government worked, and get a feeling for historic trends and events even if entire swaths of the population still got short shrift.

But, despite the tension and the partisanship, when election day(s) come around, I can’t stay home. Those civics lessons of the 50s are part of my soul and I go to the polling place wherever it is and take up the pencil or stylus or pull a lever and know I’ve done my civic duty, that no one told me how to vote or put a stumbling block before me.

And as suggested by many Jewish websites in the last few days, it seemed right to recite a prayer appropriate for the act of voting. 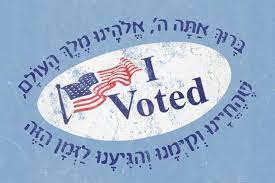 One thought on “Reflections on the Act of Voting”