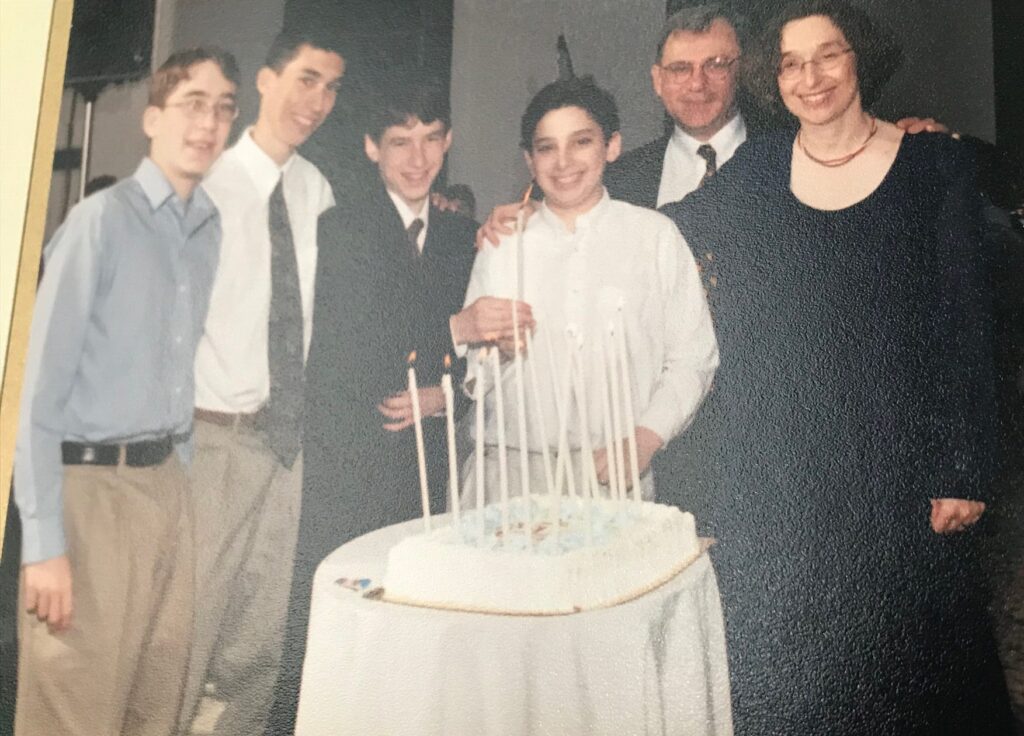 In 1987, Linda and Yechiel, and 3 little boys under 5 years old, followed the Silver family out to Montclair, a year after we had moved here. We had been acquaintances from our Brooklyn synagogue and had mutual friends, but we, ourselves, were never really friends.

Of course, that quickly changed once the Ariel/Felders arrived.  The “acquaintance” evolved into friendship, the friendship often felt like family.

About 35 years ago, the 2 families began a tradition of celebrating Erev Rosh HaShana together. We alternated hosting each year.  When we were at Linda and Yechiel’s house on Gordonhurst, we got to know Yechiel’s parents, Blanche and Joe, and Yechiel’s sister, whom the kids called “Dodah Rinne” and also Linda’s parents, Beverly and Larry, whom many of you know. By the way, this Rosh Hashana tradition continues today with a new generation, led by Lior.

I remember the warmth and camaraderie at those holiday dinners. I remember Yechiel’s homemade pickles – homemade- and talk of the salami, hanging and aging in the basement. Our son, Dan, remembers the old-fashioned glass seltzer bottles with cartridges, a reminder of the good old days in Brooklyn that “Dan” never experienced, but Yechiel knew intimately.

The Felder and Silver kids grew up together.  I have vivid memories of dropping Dan off for Super Bowl parties with Nat, Eitan and Jake, and of course, the biggest kid of all – Yechiel.  As much as Dan loved watching sports with his Dad, there was always a lot more screaming, laughing, eating and fun with all the Felder boys.

Another happy memory I have of Yechiel is more adult-centric.  He was an indispensable member of the Montclair Community Band for many years.  Not only did he play clarinet and saxophone, but he also recruited Eitan to play the drums in the band.  How lucky for Eitan to have that special connection with his Dad.

In addition to being an excellent musician, Yechiel sometimes narrated the stories behind the music. He had a voice like a radio announcer, and I was always surprised when his voice became his instrument.

Finally, continuing on a musical “note,” I remember the good times Andy and I, Linda and Yechiel had attending the Orpheus Chamber Music series in Montclair. Those evenings were always a respite from a busy week.  The relaxing, magical dates always ended by sharing desserts at a local café, or at our house, and debating whether whipped cream or chocolate was the more important ingredient in a dessert.

Now, as we stand together to say goodbye to Yechiel, I can’t help but comment on the 3 little Felder boys who have grown up to become 3 compassionate, young men, as well as continuing to be  wonderful sons. Nat and Jake have their own families. Fortunately, Yechiel got to know Anna, Alayna, Lior, Ozi and Max. The Felder boys, – I mean “men”- kept their father independent, safe and well-cared for these last few years and especially these last few months.

With all the suffering and pain the family has endured, I hope these warmer memories, filled with love and nostalgia, carry the family to a place of healing.

MAY YECHIEL’S MEMORY BE FOR A BLESSING.

Merrill Silver
Merrill Silver is a long-time member of Shomrei. She can often be seen at the piano as part of the Simcha Band, a cross-generational musical ensemble she organizes at Shomrei. She and her husband Andy host "Minyan @ Home" the Wednesday night Maariv service at their home. She has tutored many of Shomrei's B'nai Mitzvah kids in leading services and chanting Torah.

2 thoughts on “Eulogy for Yechiel”