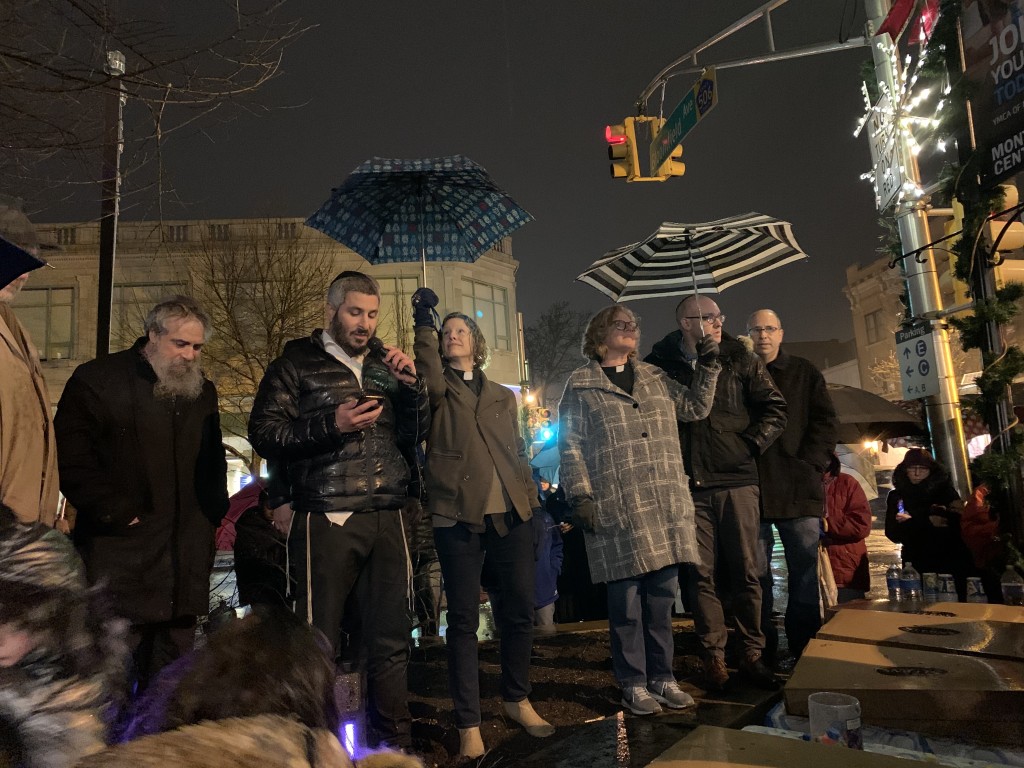 editor’s note: on the evening of Dec 29, 2019, the wider Jewish community including area synagogues and Chabad of Montclair, as well as interfaith allies gathered for the lighting of the communal Hanukkiah as an act of solidarity in light of recent attacks on Jews.

The night was cool and rainy but the hearts were warm and the voices strong. Scores of people from Montclair area synagogues were joined by others of all faiths to stand in solidarity against the recent spate of anti-semitic acts in the tri-state area.

The concern was palpable as small groups talked in hushed voices about the incidents of the last weeks. But there was also determination to not give in to fear and to do something to fight this growing wave of anti-semitism and violence.

Instead of counting heads, one needed to count umbrellas as adults and children gathered at the intersection South Part Street and Bloomfield Avenue to share coffee and sufganiot and raise their communal voices as Rabbi Yaakov Leaf from Chabad of Montclair spoke of the unity of the Jewish people which overcomes the differences between Jews. The horror of any act of violence against one Jew is an act of violence against not only all Jews but all people.  We then, with some difficulty because of the rain,  lit the menorah.

Despite the rain, the crowd did not disperse until each lamp was lit and sustained its light. To fill the gap, Rabbi Greenstein spontaneously led the crowd in traditional Hanukkah songs like Maot Tzur. The sing-along appropriately continued with This Little Light of Mine and concluded with a non traditional version of I had a Little Dreidel. Who knew there were so many ways to make a dreidel? A little imagination goes a long way.

As friends and neighbors left the corner to go back to their dry homes, each took away a bit of that light shining from the menorah and the confidence that we are not alone.

In college there was an undercurrent of non-acceptance of Jews in some circles. But it was easy to avoid those people and those places.

So at times I may have been upset, worried , concerned and wary but not afraid. I was more afraid because I was an American.

Today I believe that I- and many others- am straddling a fine line between wariness and fear because I am both a Jew and an American.

I think of my grandparents who fled to America from Europe out of fear for their lives. It seems in some ways that we are coming full circle.

That’s not a circle that should be closed; that’s not what America should be.

2 thoughts on “Rainy Night of Solidarity”