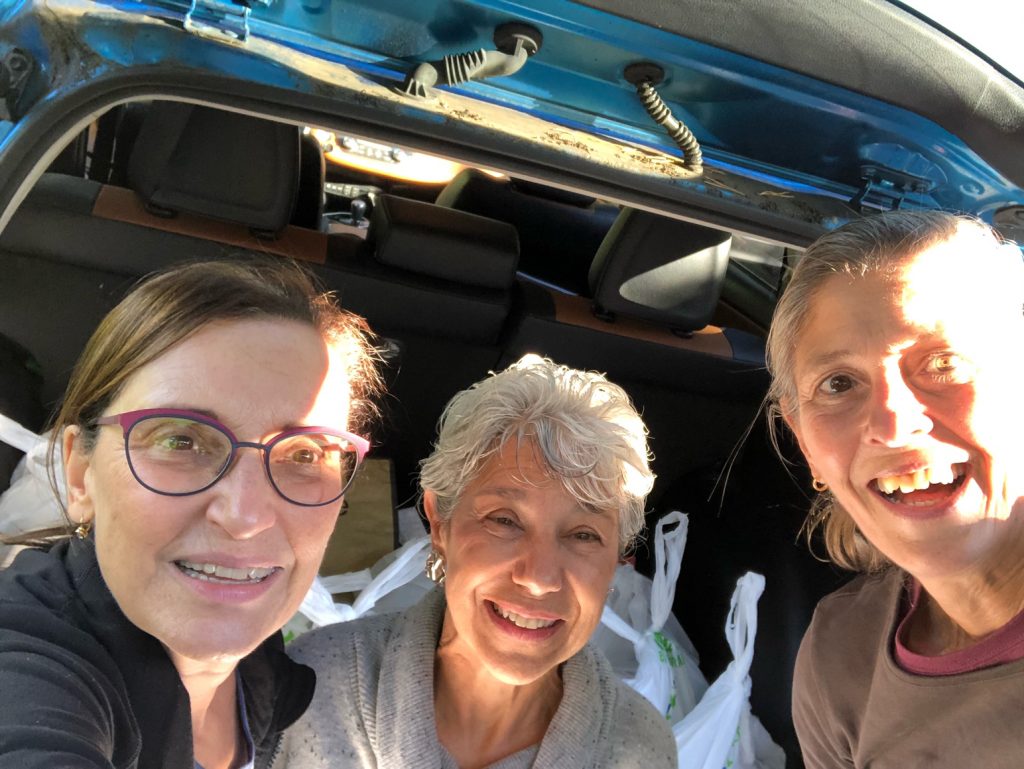 This past Tuesday on a balmy late summer eve, we welcomed 24 grateful guests to the Carol Starr MESH Cafe at Shomrei. We provided one takeaway meal and accommodated one vegetarian. Chef Stuart Green whipped up a hearty and delicious feast starting with homemade guacamole, baby carrots and tortilla chips. A green salad with Italian dressing preceded the main course of turkey chili served over rice with a side of yummy sautéed baby peppers. Guests mopped up the gravy with toasty Italian bread. END_OF_DOCUMENT_TOKEN_TO_BE_REPLACED

Many of our guests have been to Shomrei before and were very happy to be back. There are also some new faces. END_OF_DOCUMENT_TOKEN_TO_BE_REPLACED 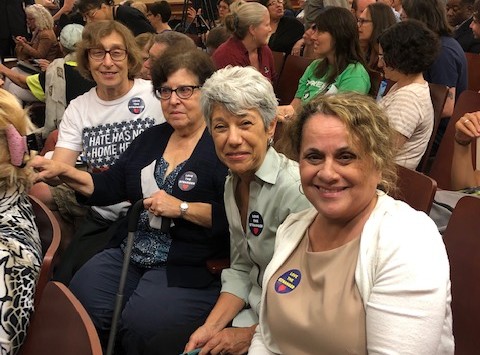 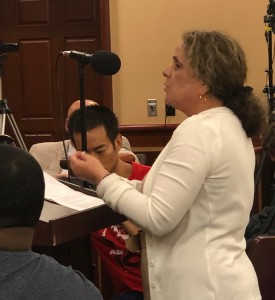 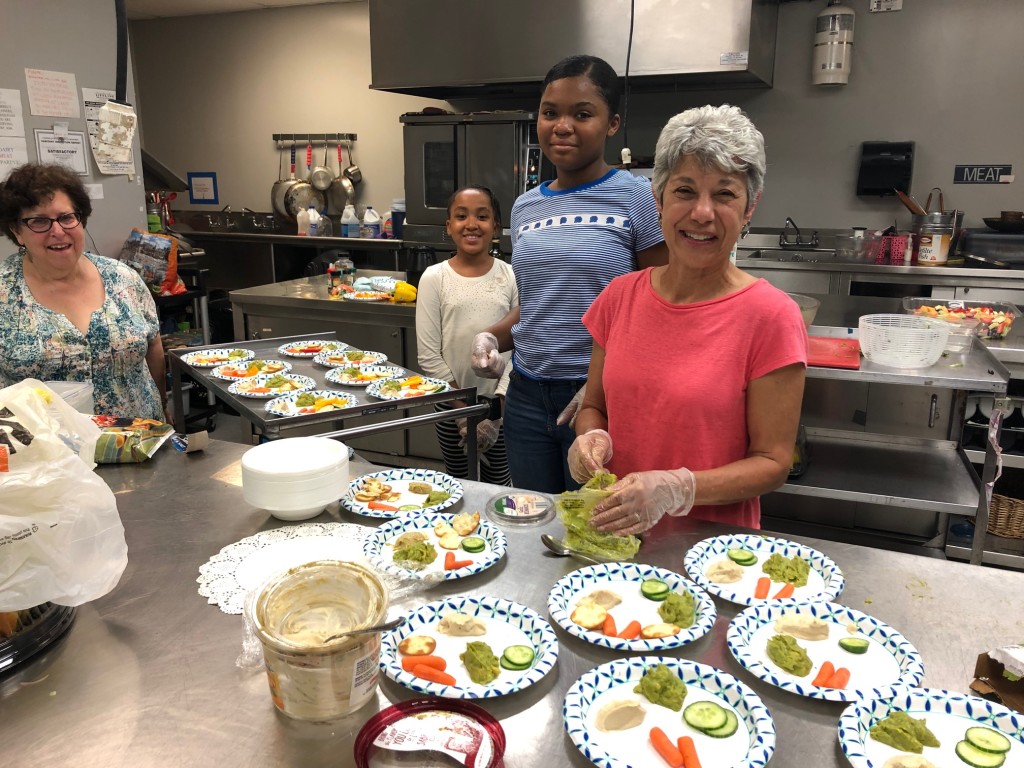 We welcomed a full house of 24 guests plus 3 takeaways to our final MESH Cafe of the spring season. We will resume serving in September while our MESH guests can attend cafe at other houses of worship over the summer. Tonight Master Chef Aileen Grossberg prepared a sumptuous feast with the help of Yours Truly, Arden Epstein and young helpers Zaniah and Sarah. Also assisting with plating, serving and clean up were Alex Kent and Rachel Kanter.
END_OF_DOCUMENT_TOKEN_TO_BE_REPLACED 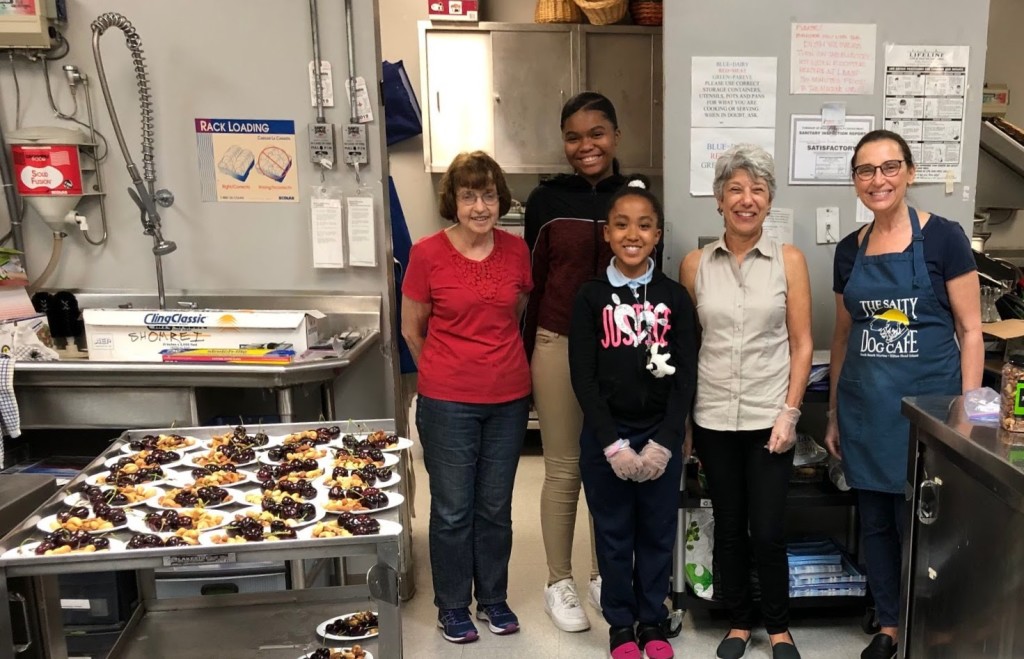 It was a stormy, wet night on Tuesday so we invited our MESH guests into Shomrei early to provide sanctuary from the storm! We had a full house with 24 guests and 5 takeaway dinners. The evening was brightened by Chef Arden Epstein’s fare, in colors of red and green…rather spring like! Appetizer was fresh cherries and nuts–can be seen in forefront of the picture; Main Course was Asian Chicken Salad with cashews and mandarin slices; string beans in a mustard dressing and a hot roll; Desert was Strawberries and homemade chocolate bark–yummm! And all the guests received a goodie bag with a power bar and clementine for a late night snack or breakfast!
END_OF_DOCUMENT_TOKEN_TO_BE_REPLACED 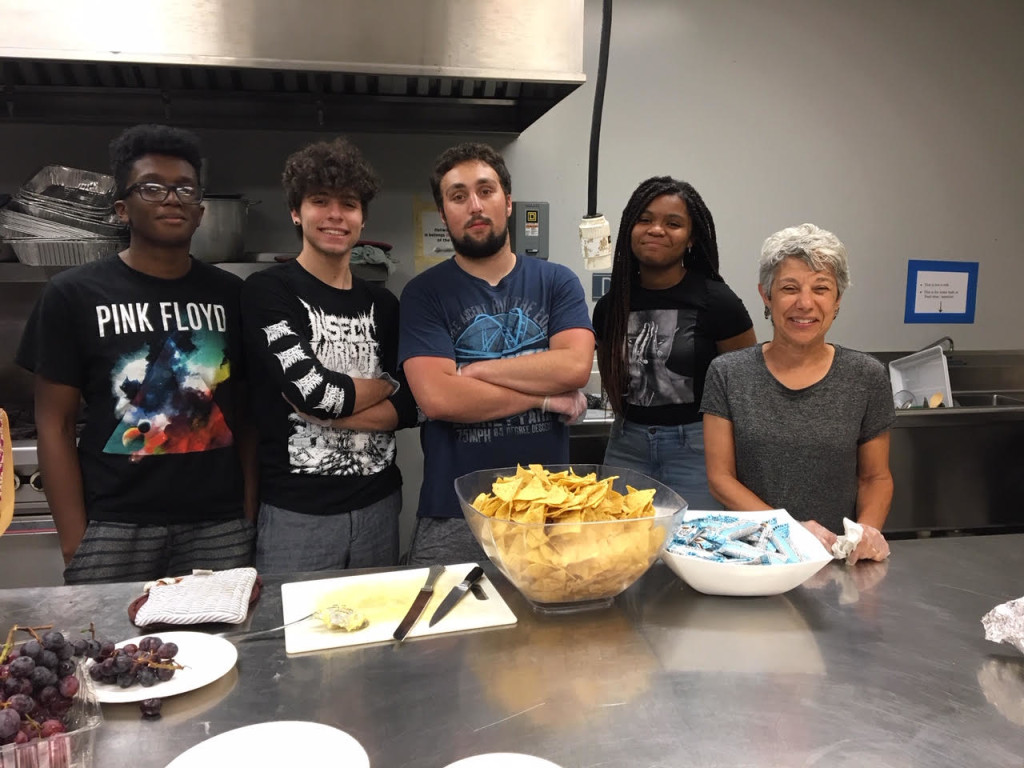 It was a great day for vegetarians (and other fans of good food) on Tuesday night at the Carol Starr MESH cafe at Shomrei. Chef Arden Epstein made a delicious vegetarian meal starting with an appetizer of watermelon, mozzarella, tomato, and basil with pita chips; then moving on to a green salad with ranch dressing; featuring a main course of polenta with cheese served with black beans and corn and tortilla chips; and ending with refreshing ice cream sandwiches.

END_OF_DOCUMENT_TOKEN_TO_BE_REPLACED 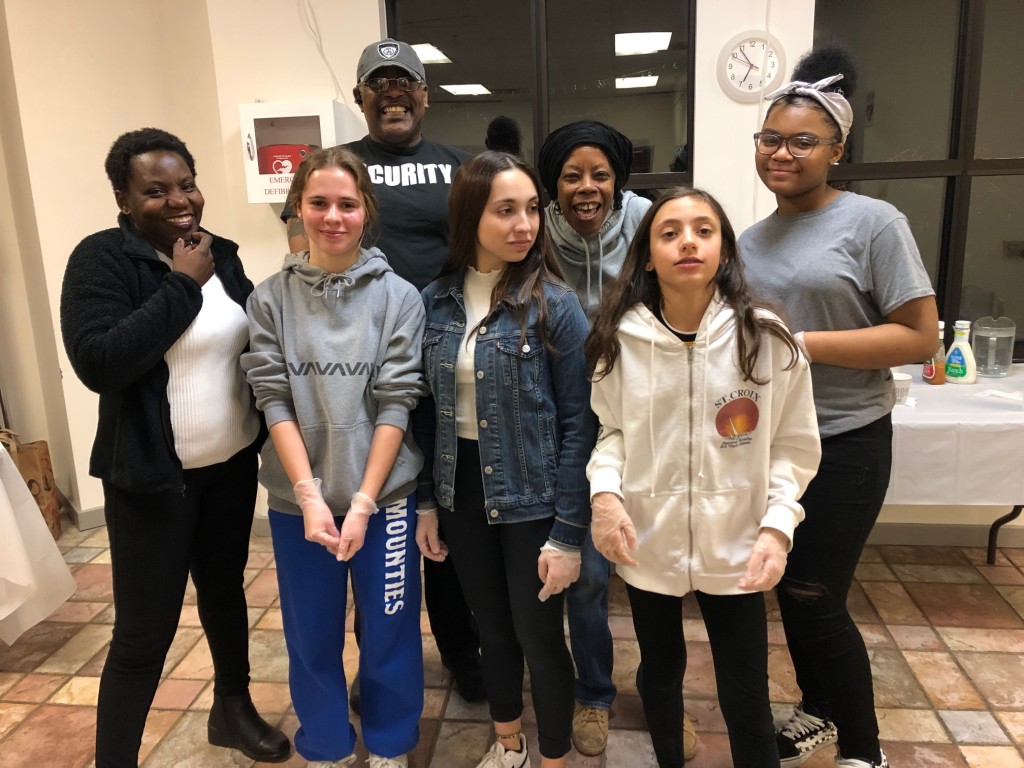 It was a cold night outside, but warm and welcoming inside!

Our fabulous Chef Arden Epstein, ably assisted by her sous chef, Zamiah, prepared a very sophisticated meal of: Deviled Eggs, Crudities and crackers for appetizers; Followed by Green Salad and French bread, Complemented by a main of  fish stew with Cod and vegetables, And topped by a homemade magnificent Cappuccino Mousse with cookies (after mixing the mousse, the captain got to lick the bowl!  END_OF_DOCUMENT_TOKEN_TO_BE_REPLACED 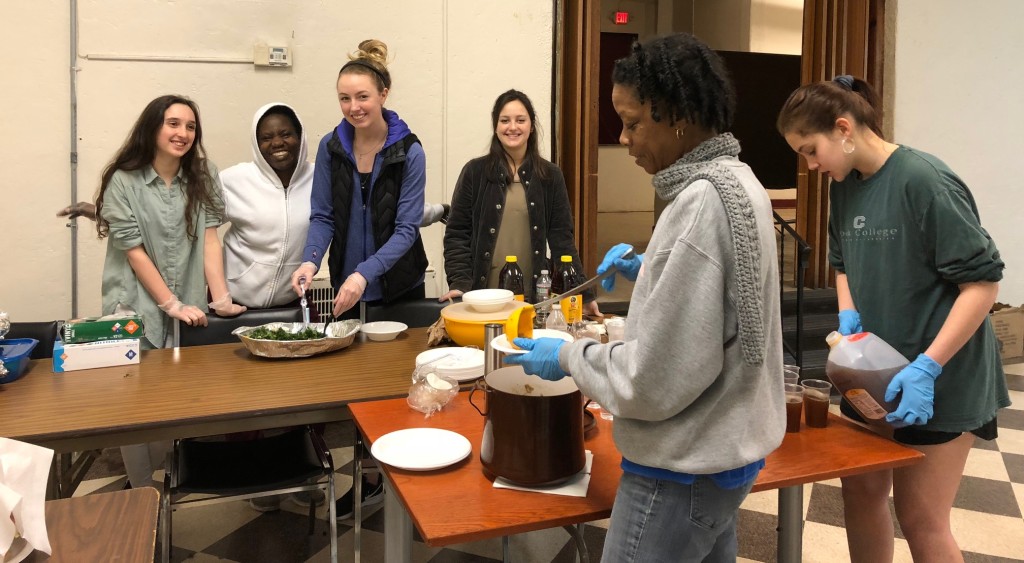 We welcomed 19 guests to Shomrei’s MESH Cafe held at Union Baptist Church.  This time, two rounds of applause…. first when our guests were told that we will be back in our own building next week and second when they learned about the delicious menu.  END_OF_DOCUMENT_TOKEN_TO_BE_REPLACED 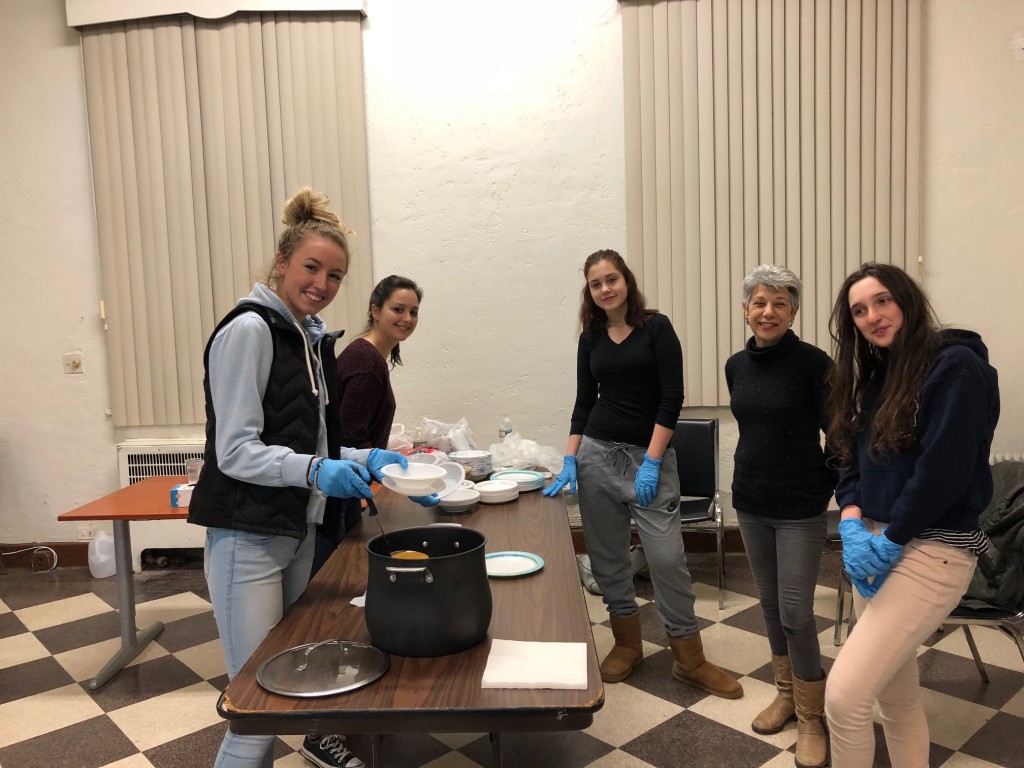